The Eastern Region is the next stop of the President, John Mahama, following his successful visit to the Volta Region.
He is expected to address mini durbars to be held in his honour in some of the communities.

President Mahama, is of the firm belief that his government has done a lot in the past three years in the area of roads, electricity, potable water and educational facilities, among others.

The governing National Democratic Congress (NDC) has declared “Operation 50 – 50” in the Eastern Region, which is to split the votes with it opponent, the New Patriotic Party (NPP), and President Mahama’s visit is to boost the morale of the regional executives of his party, as they prepare for this year’s elections.

A statement from the spokesperson for the John Mahama 2016 Campaign, Mrs Joyce Bawah-Mogtari said, “The Eastern Region has had its fair share of significant developments in the first term of President John Dramani Mahama’s government and his tour of the region is expected to boost the ‘Agenda 50/50’.”

The statement said Mr Mahama’s campaign tours have so far received “massive support from the Chiefs and People of the six regions toured.” “It is evident that President John Dramani Mahama is changing lives and transforming Ghana.”

He will pay a courtesy call on the Okyenhene, Osagyefo Amoatia Ofori Panin, after which a mini-rally will be called in his honour at the Kyebi Lorry Park.

Mahama will continue to Adoagyiri-Nsawam, Akuapim North and South and then the Okere Constituency, where he will wrap up with a mini-rally at Adukrom.

The president will storm the regional capital, Koforidua on the fourth day of his campaign.

The president is expected to end his tour at Lower Manya Krobo on Friday, October 28. 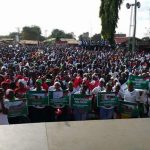