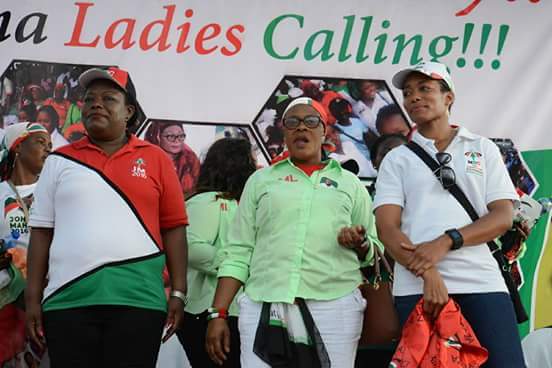 An all women supporters group of the ruling National Democratic Congress(NDC), Mahama Ladies on Sunday held a mammoth rally at the kawaokudi park in Mamobi to garner support for the president John Mahama in his bid for re-election.

Sunday’s rally in at the Ayawaso North constituency marked the culmination of almost 30 mass election campaigns the woman wing has held up and down the country since the political campaigns for the December elections began.

However, speaking to ghanaguardian.com,the chairperson of the group, Hajia Tawa Zakari Raji, revealed that Mahama Ladies will continue holding a door-to-door campaign to keep sensitising members on the need to come out in their numbers to vote for the NDC.

“This draws the curtain on rallies as far as this group is concerned but we are going to continue with our usual door-to-door campaigns, telling the good people of Ghana about the need to maintain John Mahama,”she said.
“We are doing this to sanitise our fans on the need to come out in their numbers to cast their vote for his excellency John Mahama, who we believe has done a lot to deserve a second term.

“we have the majority, and we are in the know that if all our fans are to cast their vote and do it with care , we are going to win not less than 52% and that is why we have used today’s program to elucidate our supporters on the proper way of voting.”
15230771_1559508677396989_6484501394620003418_n15192645_1559508780730312_5536071546311939705_n15267725_1559508837396973_3363816094255839427_n15259192_1559508804063643_4386206562563642284_o
The action packed events was repleted with a lot a funfairs and it also saw some notable names such as the minister of Gender, Children and Social Protection, Nana Oye Lithur, Dr Ezanator Rawlings and some female heavyweights of the party.
Hajia Tawa Zakari reiterated calls on Ghanaians, especially women, to weight among the presidential candidates to see which of them truly deserve the presidency. She said Ghanaian women should not gamble with their future, and their children’s future by voting for someone who cannot be entrusted with the hopes and peace being enjoyed in the country.
“We have a man who believes in peace and exudes peace, he has not discriminated against any ethnic group or gender, that is the kind of person you can trust and that is the kind of person John Mahama represents,” she said.
Other female supporters groups across the country were there to lend their support, showing a synergy towards the NDC agenda.
The Ayawaso North constituency is regarded as the one of the bastion of “JM toaso” agenda , and the Islamic-dominated area responded positively to the calls of Mahama Ladies as the women coveredd almost every part of the kawakudi park.
“We are here as one people with one aim , and the aim is to work together as women to see our candidate JM retained.It will not be fair to deny this handsome gentleman a second term , looking at his performance within 4 years in office.”
“The NDC has worked hard for the good people of Ghana and we know Ghanaians will not disappoint us,” the presdent of women for Mahama, Theresa Awuni, told ghanaguardian.com
According to Hajia Tawa Zakari Raji, Mahama Ladies will, with immediate effect, embark on the door-to-door campaign as there is just a week left for the elections to be held.
By: Fiifi Abdul Malik