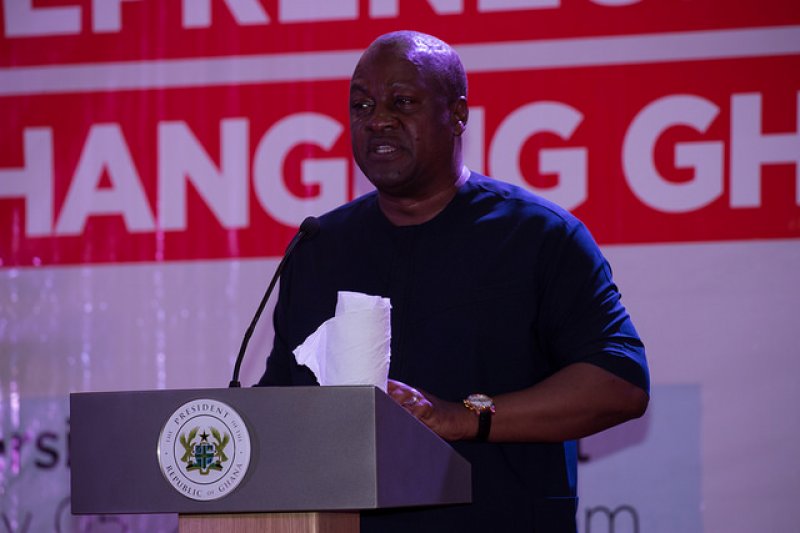 President John Dramani Mahama has said that he has not made Ghana a paradise despite the massive investment made in infrastructure, especially in the health sector.

According to him, he is currently building on what his predecessors had done, and cannot fix every challenge confronting the nation in four years. However, government has put in the measures to ensure that Ghana is able to attain a middle-income status by 2025.

Ghana he said have challenges confronting it but government he quickly added is investing massively in infrastructure to help make access to healthcare easier and better.

His comments were in response to a question asked him during his interaction with the Ghanaian community in the UK on the sidelines of the just ended anti-corruption summit organised by the United Kingdom government.

One participant had asked President John Dramani Mahama what is government was doing to improve healthcare delivery in the country, Ghana.

The participant had cited a story carried by Nyankonton Mu Nsem that a woman was turned down by three major hospitals in Accra due to lack of beds at the health facilities.

Responding to the question, President Mahama said, government had done impressively well investing in health infrastructure but there remain challenges which efforts are underway to resolve.

Government he indicated is increasing the bed space to about 6, 000 but the country needs more especially a for a population of 26 million, he added.

“We are not there yet. I’m not saying I’ve made Ghana a paradise, but I’m building on what I inherited from my predecessors and I’m taking it to the next level and when I leave, somebody else will take it to the next level. In four years, I cannot fix everything but will take the steps that continue to fix the problems we’ve identified.

“And eventually, I mean 2025-2030, we will have the kind of system that makes us either a full middle-income country or a fully developed country…We have challenges… and I will be the first to admit that people are dying who shouldn’t die because if they had access to an ambulance, and they went to the hospital and the ICU was working, they will get immediate care and that is why we are investing money; we’ve re-opened the new Korle-Bu ICU- we’ve refurbished it completely to receive more people.”

President Mahama stated further that there is more work to be done, and the only way to do so, is for Ghanaians to pay their taxes to ensure that government is able to undertake the infrastructure Ghanaians yearn for.

He chided Ghanaians for not paying their taxes, yet there always want better services.

“There is a lot of work to do. And how do we do that work? It means that we must pay our taxes. You go to Ghana and nobody wants to pay their taxes. It is estimated that only 30% of our population pay taxes…We want the best of services but we are not willing to pay the taxes to make it possible.”

He added it is more challenging to be the President of Ghana, than any other country in the world.