Vice President Paa Kwesi Amissah-Arthur has expressed gratitude to President John Mahama for choosing him as his running mate for the 2016 general elections, saying it did not come as a surprise to him.

“I’m grateful that he has given me this opportunity to be of service and I will continue to serve him to the best of my ability. I am elated he has reposed confidence in me,” he told journalists few hours after he was announced as Vice Presidential candidate for the National Democratic Congress.

“I’ve tried to be honest in my daily interaction with him about what I consider to be the issues. I hope that I will be able to be even more honest with the views that I express to him in the future so that together we will be able to find solution to the many problems that confront the President,” he added.

Mr Amissah-Arthur said he had always made his views known to the President on almost all issues that he has a view on, noting “I’ve watched and listened carefully to all the various things that have been said the last few weeks and I’m surprised that people may not realise how close we’ve worked together.”

After days of intense lobbying, President Mahama on Monday announced to the National Executive Council of the National Democratic Congress that he has settled on Mr. Amissah-Arthur as his running mate.

Prior to the announcement, supporters for some key members of the NDC, including Speaker of Parliament Edward Doe Adjaho, Trade Minister Ekow Spio-Garbrah, and Foreign Affairs Minister Ms. Hanna Tetteh espoused why their choice should be picked over Mr. Amissah-Arthur.

Declaring Mr. Amissah-Arthur Monday in Accra after a NEC meeting, President Mahama said he consulted with the Council of State on who to settle on as his running mate for the 2016 Presidential election and his Vice came top.

“I nominated Paa Kwesi Amissah-Arthur my Vice President as my running mate. Reason being he is able and willing to do the job. He’s got a good track record, he’s been Deputy Minister, he’s been Governor of the Central Bank, he’s been my Vice President, indeed he’s been acting President on occasions I’ve been out of the country.

“I believe that it’s been a useful partnership. We went into 2012 together and I believe that going into 2016 together we will achieve victory,” President Mahama said of Mr. Amissah-Arthur. 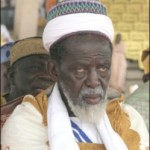