A former minister for Environment, Science, Technology and Innovation, Mr Mahama Ayariga has condemned the deployment of a joint military and police task force to illegal mining areas.

The act according to him amounts to the use of excessive force at the expense of tackling the problem of illegal mining at the root.

Mr Ayariga said this on an Accra Based Joy FM’s news analysis programme, Newsfile, on Saturday.

The government commissioned the Operation Vanguard two weeks ago to scale up the fight against relentless and sometimes armed illegal miners dotted around mineral-rich sites in the Ashanti, Eastern, and Western regions.

But, Mr Ayariga said government’s decision to deploy the task force is a wrong move to dealing with the problem of illegal miners

“The Military [deployment] is absolutely unnecessary. We don’t need whole armed forces there. We just need to figure out the systems and work on the systems,” he said

Illegal mining due to institutional failure

Mr Ayariga also the Member of Parliament for Bawku Central said the galamsey menace in the country can be attributed to institutional failure.

He said illegal mining has come about because state agencies that are responsible for licensing people to mine legally enter into arrangements with other people to encumber mining concessions.

“So the young people that we are encouraged to engage in legal mining when they go for permits, they are told that this place someone has already obtained the concession and they [illegal miners] living in the community and they never see a mining company come to mine in the area.

“But anytime they go for a permit, they are told the place is encumbered. And after several years, they just start mining,” he explained how illegal mining has sprung up across the country.

He was of the view that, the size of earth moving machines that find their way to and operate at mining sites would only escape authorities unless there is collusion with state agencies.

He, therefore, said the problem must be tackled at these sources.

“Recently I visited mining site, and I saw earthmoving equipment standing there. So I asked myself ‘how did this equipment pass to get this site’? And the police in this town are telling me they could not have stopped this heavy equipment to getting to the mining site? ” he quizzed. 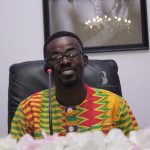