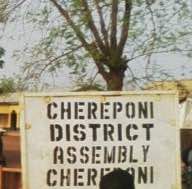 There is this latest development in Chereponi District in respect to a theft case.

Chereponi DCE caught pants down, in a collusion with top constituency executives reportedly broke into the stores of the District Assembly and stole electrical materials belonging to a contractor worth several thousands ghana Cedis. The materials were supplied under the Self Help Electrification Project(SHEP) somewhere mid last year(2016) for purpose of getting some villages within the Chereponi district connected to the national grid of which works were started to a greater magnitude but were subsequently halted after last December elections.

Unfortunately, when the contractor came to site this week and wanted to recheck the inventory of what he hitherto knew he had in stock in the district Assembly’s stores he couldn’t find a greater proportion of his materials in the store.

The contractor thereafter questioned the security man at the premises (the assembly stores) on the whereabouts of the electrical materials, he was then told the 2 npp constituency vice chairman and organizer together with an assembly man sympathetic to the NPP came and picked those materials some months ago from the store with the message that the DCE for Chereponi had asked them to come and pick those materials and he couldn’t therefore resist since they said it was the DCE who had directed them to do so.

The contractor upon receiving this information from the said security man immediately reported the case to the Chereponi police command in his quest to help him find these alleged criminals since the materials aren’t properties of the Assembly. Some arrests were made afterwards on November 20, 2017 but were later granted bail with the intervention of the DCE in the person of Mr. Razak Tahiru after series of interrogations.

It must be stated here that the DCE initially denied having any knowledge of such act but had to subsequently accept having knowledge of that in a meeting held in his house that comprised the contractor and the police command.

The police then went to the Assembly’s stores together with the DCE, the contractor and the alleged perpetrators to assess the situation and it was realized the stolen items are worth GHC 59,750 plus per the way bill that previously accompanied those cables or materials from the supplier to the stores. The case was therefore being prepared to be forwarded to the magistrate court in Yendi on November 21, 2017 but has been reversed with reliable information reaching me indicate that the that the DCE has asked that they give him one week to pay for the full cost of the materials stolen.

President Akufo Addo promised he will not shield corrupt appointees under his watch, and that he will protect the public purse, this is a test case for the president to cause investigations into the matter by the appropriate body and to allow the perpetrators put before the law court.

A citizen of Ghana 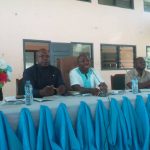