A memorial service for Kwadwo Asare-Baffuor Acheampong (KABA), who passed away on Saturday is currently underway.

A book of condolence has been opened at the Front Desk of the Radio building of The Multimedia Group at Kokomemle, in memory of the late KABA.

Emotions are pouring out as the memorial service, which is being held at the forecourt of the Radio Building, which houses Joy FM, Adom FM, Asempa FM and Hitz FM, draws tears.

Friends and family of the popular radio talk show host, as well as renowned politicians and captains of industry, have been thrown into a state of shock as they grieve the broadcasters passing.

“I’ve known him for a very long time. He was one person who looked up to me for advice, for direction. He was very respectful, very hardworking and so it came as a huge shock…” he recalled.

Citi FM’s morning show host Bernard Avle also described KABA really nice guy and asked for prayers to be said for his wife and daughter who he left behind.

He was noted for his many anti-corruption campaigns.

He tied the knot last year with Class FM’s Valentina Ofori Afriyie and they have a daughter together. 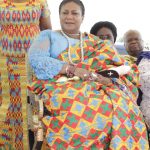