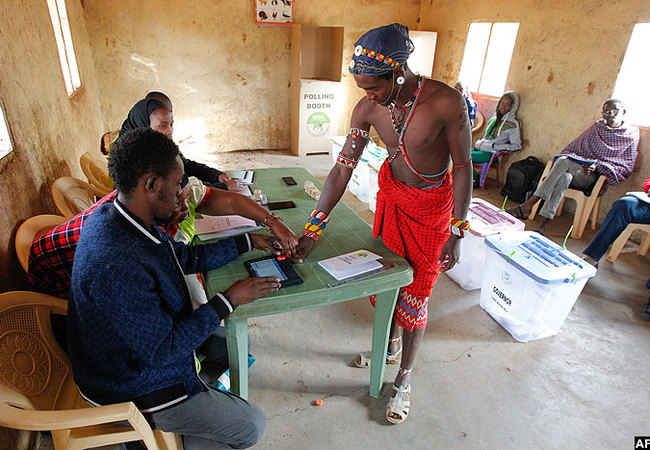 Kenyans are voting for their new leaders today. Here, on this page, we are bringing you live updates from across the country.

For the first time, Kenyan inmates are being allowed to vote. But they are casting ballots for the presidential candidates only.

Well, at least it’s something, right?

Pictured above are inmates waiting in line to cast their vote in Kisumu maximum prison in Kisumu.

At least 145 inmates have cast their ballot at the Kisumu maximum prison.

Incumbent Uhuru Kenyatta appeared in great spirits as he cast his ballot a little while ago in Gatundu, Kiambu county.

Can he shake off the force that is rival Raila Odinga?

It won’t be long until we find that out.

. . . Kenyatta’s running mate and current Deputy President, William Ruto was in equally positive moods as he shook hands with supporters after voting at Kosachei Day School in his home constituency of Sugoi village near Eldoret in Uasin Gishu county.

So what’s the main course on today’s political menu?

Uhm, of course no prizes for guessing right.

The Kenyan election is a staple for regional and international media alike. And in Eastern Province in Kenya, this Samburu warrior did what millions of other fellow Kenyans are doing today: Vote.

He was pictured arriving at this polling station in Nkirish to cast his ballot.

And after making his choice, he left the polling station as majestically as he had walked in. Head held up and proud to have exercised his right to vote.

On the eve of the crucial Kenyan election, former US president Barack Obama urged Kenyans to hold a peaceful and untainted election in the East African country where his father was born.

This man pictured (above) waiting at a polling station in Kilimani Primary School, Nairobi reads a newspaper with the headline “Great day for Kenya”. The same paper ran the Obama story on the opposite page, if you have the critical eye.

It’s an election for all . . . from those voting for the first time to those bent with age, thousands have descended upon polling stations to cast their ballots.

We have our weapon’

Mzee James Jenga, a Kenyan national who has lived in Uganda for the last 20 years, says this is his second time to vote in Uganda. “We wananchi have our weapon and that is the vote. I’m happy that Kenyans have turned up to vote and I believe things will get better after this election. We don’t expect any violence,” he tells New Vision’s Ashraf Kasirye.

“The chairman of the Assoiation of Kenyans in Uganda, Isaiah Kojwang (pictured above) has told reporters that the two main candidates incumbent Uhuru Kenyatta and Raila Odinga have agents here but the rest did not bother.

“Kojwang says out of the more than 15, 000 Kenyans who live in Uganda, about 1200 registered voters expected to vote from here, others went back to Kenya to cast their votes from there.

“William Kahindi, the deputy returning officer of the Diaspora Constituency, says the exact number of registered voters is 1184, with 592 at each of the two polling stations. He says results will be counted and declared here and today.”

9.45am: Kenyans in Uganda vote

Meanwhile, Kenyans in Uganda are not MIA*. They have joined their fellow countrymen and women in all matters ballot.

Those who registered to vote are doing so at the Kenya High Commission in Kololo, Kampala.

It’s long lines everywhere. Voter turnout impressive. Even at this polling station in the suburb of Nyali in Mombasa, at the Kenyan coast.

Each ballot paper is a different colour, with a corresponding ballot box.

There are more than 19 million registered voters in the nation of 48 million. Half are aged under 35.

In Kenyatta’s home town Gatundu, north of Nairobi, this voter carrying a baby verifies her identification at a polling station

Incumbent Uhuru Kenyatta and his rival Raila Odinga are headlining this election which appears too close to call. Who will take the day?

The voters have the say. And they are doing well to exercise that constitutional power.

This voter looks at his ballot at a polling station in Kibera.

This edition of the Kenyan elections is seen as a litmus test of Kenya’s progress since a disputed 2007 election sparked violence that left over 1,100 people dead and 600,000 displaced.

By the way, many people planning to vote camped out several hours before official polling time. As you can see, long lines are snaking outside of polling stations arouind the east African nation under heavy security

8.05am: Chilly morning in Eldoret

Kenyans slapped on their jackets and scarves, and marched to the various polling station across the country to elect their new leaders.

The aerial shot immediately above is of a polling station in the Rift Valley town of Eldoret.

7.50am: Checking names, joining the queue

Earlier, before opening of polling at this polling station in Kisumu, Kenyan Independent Electoral and Boundaries Commission (IEBC) officials made sure to check paperwork first.

7.20am: Checking names, joining the queue

People use the lights from their mobile phones to check names on the voters’ roll at a polling station in Kibera.

In Kisumu, in the western part of the country, Kenyans were seen waiting in line to cast their ballot.

It’s election day in Uganda’s neighbour and voters got out of their beds earlier than the cocks could do their thing.

By as early as 6.00am East African time, voters were already at their respective polling stations waiting to cast their ballot.

All the best at it, dear Kenyans.