Hitler’s Nuremberg meetings with their mass ecstasy and mass reactions designed to “condition” the individual German into forgetting his independence, worked for a while but the architect, suffered brutal humiliation and pain when the people realised his wicked agenda.

I am still struggling to know the motivation behind your penchant for telling well packaged lies.This is clever ploy designed to gain respectability and public sympathy for an administration that has lost its goodwill days into off.Are we still in the campaign days? After elections,we must on attaining acceptable conditions of living in conformity with our desired goals of achieving progress and happiness for our people.You still have some unanswered questions on your table including the Togolese voters register issue and the dead IMF information you planted in the media as fresh.

I still have some cogent questions for you on the matter of the construction of official residence of the Vice President.

a) Did then Vice President Amissah-Arthur tell you anything about the ongoing construction of the official residence of the Vice President? I am standing by for your response but before you touch on it,I am stating here emphatically that there was a discussion like that when you accompanied the former Vice President for a tour of the flagstaff house.

e) Do you have evidence suggesting that President involved himself in the negations?Are you per your lies telling Ghanaians you are going to remain irrelevant as we seeing.

Dr, respectfully,furnish Ghanaians with answers to these cogent questions to either help you bury further your sworn enemy John Dramani Mahama, or clear him of the filthy lies peddled about him before the alter of our Lord and members of that church

Dr Bawumia, we are always guided by the insincerity you’ve exhibited on the religious landscape and the lies you told Ghanaians about the Togolese Register when dealing with you. As one French writer Jean-Paul Satre once said, I quote “You can deface a monument but you cannot extinguish a name that has come to remain a history in the minds of people” Soon,Ghanaians will tell you that your lies about Mahama and the desire to see him defaced is enough. But you must always remind yourself of what you poured out to Allah when you faced the black stone in Mecca whenever you embark on this wicked agenda.

Dr Bawumia, I have asked these questions because I am aware that the Vice President told you he ordered that no more payment be made after the $5 million until the issue was resolved between the contractor, and AESL which sharply contradicts the lies you graciously preached inside the church auditorium.I am also aware that you even commended the Vice President for taking that decision and extended a shook him for that display of exemplary leadership.What has changed? Has the church become your new arena for the propagation of your bedroom grown lies?

We all watching proceedings but remember the Ghanaian voter has become too sophisticated to be deceived with such old orthodoxies. 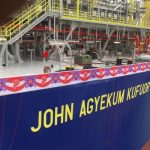