Deputy General Secretary of the ruling National Democratic Congress, Koku Anyidoho have advised the 2016 campaign Manager of the New Patriotic Party, Peter Mac Manu not to dare carryout his plans to declare their own results of this year’s election.

Speaking to Ghanapoliticsonline.com, the ‘Bull’ as Koku is affectionately called, ‘Let Mac Manu dare declare results in this country and he will see what will happen to him…, just recently wontumi after spending one night at the police station have been mute , so Mac Manu will also be mute when he tries it’ he stated.

His comment was in reaction to Peter Mac Manu’s daring comment that the NPP will declare its own election results aside what the Electoral Commission will do.

‘They know they can’t win any election in this country, so they are planning war to create confusion so the international community can come in for power sharing, the civil war agenda of NPP will not see the light of day ’ he assured. 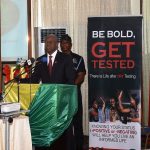