Minister Seth Terkper says the Mahama-led administration is leaving behind a well-stabilized economy with bright prospects.

He said the numbers shows that the Ministry’s fiscal consolidation program has worked resulting in inflation reducing significantly, a fairly stabilized Ghana cedi and a budget deficit which has reduced from 12 percent to 6.3 percent in 2015.

Speaking to the press at a presentation on the state of the economy in Accra Tuesday, Mr Terkper said the current account deficit has also been going down.

“Over the last four years we have been following a path of fiscal consolidation, which has led to an economy that has turned around, and the economic indicators points to a clear stabilized economy”.

He added that the necessary foundation has been built for that expected boom to happen from next year, only if Ghana follows up on the path of fiscal prudence which will result in a growth projection of about7 percent for next year.

“All things suggest that there will not be a reversal of this consolidation,” he said.

Mr. Seth Terkper was of the view that but for the challenges with commodity prices as well challenges on the jubilee field, things would have been better than what the country is currently witnessing.

He cited an instance where due to some measures put in place to build up the country’s strategic stocks, the country has not paid any forex loss for petroleum imports for this year.

In a related development, government is expected to miss out on end of year budget deficit of 5 percent which the Finance Minister attributed to the challenge to revenue shortfalls, slow foreign exchange inflows and gas supplies from jubilee FPSO. 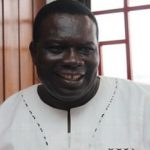