The PPP has so far raised accusing fingers at the NDC over the development.

The National Democratic Congress (NDC) has denied claims that President John Mahama is behind the probe into the campaign finances of Dr. Papa Kwesi Nduom.

The Economic and Organized Crime Office (EOCO) has given the Presidential nominees of the Progressive People’s Party (PPP), Dr. Papa Kwesi Nduom and All People’s Congress (APC) Hassan Ayariga up to Wednesday, October 26, to furnish their office on how they funded aspects of their political campaigns.

The Daily Graphic Newspaper reported that EOCO is in a letter is asking Dr Nduom to explain the source of the over GHc1.7 million Cedis he used to pay for the filing fees of the parliamentary candidates of his party and his presidential filing fee at the Electoral Commission (EC).

The letter also stated that EOCO was interested in knowing how Ayariga claimed to have spent over $6 million dollars to procure vehicles, among others for his campaign.

However, speaking on the matter Monday, Mr. Kofi Adams, the campaign coordinator of the NDC, said: “We [NDC] do not intend to influence their [EOCO] way of working and President Mahama cannot call them to order yesterday, today or tomorrow because they are doing their independent job”.

“If they have nothing to hide, they should just go and tell them but hiding and accusing others, I am sorry to say that we have more serious things to do,” Mr Adams told Accra-based Joy FM.

The letters inviting the two disqualified aspirants which were dated October 21, 2016, was signed by the Executive Director of EOCO, Justice Tsar.

Dr Nduom has since filed a suit challenging the disqualification. Ayariga has also suspended his presidential campaign to fully support that of the parliamentary candidates contesting on the ticket of the APC pending a court ruling over his disqualification. 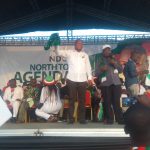