The Industrial and Commercial Workers Union has accused the Ghana Education Service of being responsible for the low turnout of demonstrators in its Wednesday’s nationwide demonstration.

The Western regional chairman of the union Osei Assibey Antwi said the GES intimidated member teachers by threatening to do a headcount of teachers in the various schools on the day of the demonstration which led to the low turnout experienced.
He said “we had information that some directors at GES clandestinely sent messages round that they were going to do a headcount in the schools and that kept most of our member teachers outside this demonstration, but whatever they do, organized labour will strive”.

He sent a strong warning to the Ghana Education Service to desist from infringing on the rights of its members from demonstrating to drum home their concern.

Mr. Assibey also expressed disappointment with the reception given the demonstrators in the western region. After walking for over two hours on some principal streets from Takoradi to Sekondi, only the leadership of the demonstrators was allowed entry into the regional coordinating council. Their petition was also given to the chief director at the western regional coordinating council instead of the regional minister the demonstrators had wanted to hand over their petition to.
Mr. Asibey Antwi bemoaned that “It’s an unfortunate situation because at the national front the president has travel and then you come to the western region, both the regional minister and his deputy has traveled. I do not want to suspect that they do not respect Ghanaian workers. But if they give us the course to think that way, then we are in for them”. 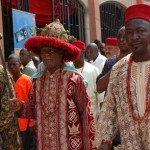