Kwesi Pratt Jnr, Managing Editor of the Insight Newspaper, has jumped to the defense of Awutu Senya West MP Hanna Tetteh in her fight to retain her seat.

In a video which is circulating on social media, Madam Tetteh’s main opponent, George Nenyi Andah is seen telling the crowd to ask Madam Hanna Tetteh to show them her husband.

“I came here with my wife, and children. Please tell Hannah to also come and show us her husband,” he said, in apparent reference to comments attributed to the MP in which she indicated that Mr Andah was irresponsible because he had had five jobs in six years.

Mr Andah has explained that his decision to introduce his wife to the audience was not to attack Hannah Tetteh but to dispel reports of his ‘irresponsibility’.

According to Kwesi Pratt Jnr, such a comment should not come from a man of his caliber because he has a lot of respect for him and impressed by his depths of knowledge through interviews he has had with him (Mr Andah).

“So is George Andah telling us that if a woman is not married it means she is useless? I am so shocked that this fine gentleman will stoop so low to make such comments. I have a lot of respect for this man and that is why I feel terrible and disgusted about this” he said on Radio Gold’s current affairs show, Alhaji and Alhaji Saturday.

Kwesi Pratt believes the inclusion of women during the planning and implementation of policies in the country at the decision making level provides a guiding principle on how to deal with issues concerning them.
The veteran journalist opined that more needs to be done to encourage women to take advantage of the opportunities available to them in politics and not to discriminate against them.

“Hanna Tetteh has been discriminated against. There are all kinds of gender organisations who complain about discrimination against women and I hope they have read this article by George Andah in the course of his campaign.

“You can disagree with her, but to attack her personality is very bad and below the belt because we all know that Madam Hannah Tetteh was married with kids but divorced and so if a woman is not married, then are you saying that she is useless” he quizzed. 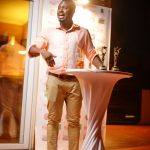