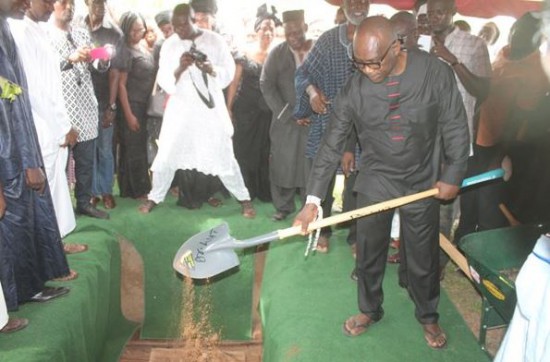 The woman who gave Ghana, Kwasi Twum has been given back to her maker – albeit reluctantly.

A short illness broke the seal of immortality bottled in her mortal body. And so a decent number of family and close relations showed up at the Kotoka International Airport to meet the remains of Naana Nueki Carboo Opetoto I.

The body of Naana Nueki Carboo Opetoto I did a brave tour of Accra like a busy tourist with a deadline to beat and immortality to meet.

It was brave because three stops in a terrific Friday traffic in Accra requires a certain amount of determination to contain the noise and the jam.

At the family home in Mataheko to the Central Mosque at Abossey Okai and finally to Gethsemane Memorial Garden at Shiashie, where the dead can listen to watery music composed by a small fountain inside the green garden.

Kwasi Twum was a very active proton at all the stops. He sort of invested energy meant to mourn into activity meant for the organizers.

He would throw a hand directing the sharing of bottled water and later make a brisk walk to whisper an instruction to another.

But he sobered down when he reached the chiseled out pit at ?? ?????, the Hebrew word for Gethsemane. If you can pronounce it, you could explain death.

His knees gave way like a faulty scaffold as he knelt before the pit long enough for the brain and the eye to shutter in, one last image filed under the cranial section containing memory.

He was not restrained from mourning. He was granted a respectful moment with his mother – a sort of communication that allows no third parties much like the unique unspoken conversation between a baby and a breast.

It was a Muslim burial. And so the National Chief Imam, Dr. Sheikh Nuhu Sharubutu, surrounded by clerics and a few family members arched the burial site under a canopy where prayers were said. A Muslim burial is a Japanese high-speed train – blinding fast.

Suddenly, the group disengaged, the Muslim national leader headed for his 4-wheel drive and with holy speed departed the grounds.

It was a funeral of cheerful mourners – and for good reason. Here is the accomplished son of a consummate mother. And accomplished sons have accomplished friends. So Stanbic CEO Alhassan Andani, the man with an eye for a mine, Sir Sam Jonah, Bishop James Saah, Ato Sarpong and yes – NPP leading figure Alan Kyerematen was also there.