According to her, “it is easier for people to make sweeping statements but whatever he [Dr Nkrumah] did was done through parliament or a referendum”.

The former Member of Parliament (MP) for Jomoro acknowledged that Dr Nkrumah had his shortcomings but emphasised that “he lived and died for the emancipation of African freedom, that is why till today he is being [idolised]”.

Explaining further, she pointed out that Dr Nkrumah “was a human being like any of us and I’m sure he was not perfect” but said she saw him as a hero and one of Africa’s freedom fighters, adding: “I can’t help it, it’s a joy to learn from him.”

Ms Nkrumah, who was speaking in an interview with the BBC together with Noo Saro-Wiwa, daughter of Ken Saro-Wiwa, a Nigerian writer and environmental activist who was killed in 1995, in a documentary titled Daughters of Political Icons said: “I feel humbled and privileged to be associated to Nkrumah in anyway. For me, he is not just a father but he is a political prophet, a mentor and many things.”

She said his father “left a strong impact on many Africans and every black person felt some sense of pride and dignity about the Ghana of the late 50s and 60s”.

It would be recalled that ex-President John Agyekum Kufuor, who was interacting with the leadership of the International Democratic Union (IDU) which paid a courtesy call on him at his office in Accra on Tuesday June 20, said Dr Nkrumah misused Ghana’s resources and plunged the country into poverty.

Explaining further, he pointed out that by 1963, “our then President Nkrumah, left of centre politician, moved the country into a one-party state with a lot of intolerance; he built a whole prison just 22 miles of Accra for detention of political opponents”.

He observed: “Democracy as we are espousing was virtually killed,” and was quick to add that “by 1966 the country had had too much and it was labouring under poverty it had never known before”.

Mr Kufuor, who served as president between 2001 and 2009, said the country was “labouring under intolerance and people were not allowed to express themselves [under President Nkrumah]…”

He indicated that it was after 1992 that the country became stable and democracy was introduced and hopefully has been strengthened over the years. 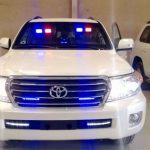