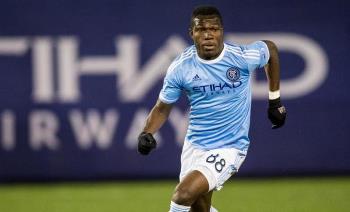 American-based Ghanaian midfielder Kwadwo Poku has been named in Bleacher Report’s top 100 players to watch in 2016.

Poku was ranked 90th in the list which had the likes of Real Madrid’s Karim Benzema, Neymar of Barcelona, and Juventus’ Paul Pogba.

The New York City forward got his name in the list after his spledid performance in the Major League Soccer last season where he was able to bag in 4 goals for his side.

The list released by the San Francisco-based American digital media company shows the 100 most promising players who are set to explode and dominate the headlines in 2016.

The former Asante Kotoko midfielder was among only six players in the Major League Soccer who made the cut in the top 100 players named.

Kwadwo Poku’s performance in 2015 earned him a call up into the Black Stars for the friendly encounter with Canada in the USA.