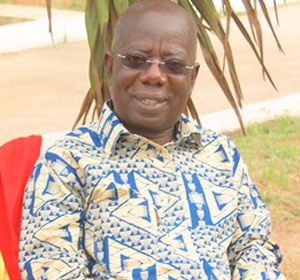 Former Chief of Staff under the John Kufour Administration, Kwadwo Mpiani, and other big shots on Wednesday, were in court alongside a huge number of supporters of the New Patriotic Party (NPP) to support suspended National Chairman, Paul Afoko, in his suit against the party.

Their presence, confirms the gaping cracks in the NPP going into the November 7, 2016 Presidential and Parliamentary elections.

Indeed, they appear to be communicating a clear message to the NPP Presidential Candidate, Nana Akufo-Addo, who has been gloating over the suspension of Mr. Afoko, and the General Secretary, Kwabena Agyapong, as well as the Second Vice Chairman, Sammy Crabbe, in his speeches, that only a united party could win him the forthcoming elections. www.GhanaPoliticsOnline.Com

Mr. Mpiani, who is believed to be part of a faction of the NPP, whose allegiances lie with former President Kufour, was flanked by another suspended executive, Sammy Crabbe, during the hearing.

According to the suit, the action and processes leading to his suspension by some elements of the party were unconstitutional and a breach of natural justice.

The NPP’s National Executive Committee, suspended Paul Afoko in October 2015 for “misconduct.” The decision was adopted by the party’s National
Council, which is the second highest decision making body of the party after congress.

Mr. Afoko, rejected the reasons for his suspension, and subsequently sued the party for taking such an action against him.

The suspended Chair, had earlier described his suspension as unconstitutional and a breach of natural justice.

“The illegal National Executive Committee meeting adopted the illegal recommendations of the disciplinary committee following the rules and procedures laid down by the constitution by appealing against these illegalities,” he complained.

Paul Afoko had alleged that the party’s action against him was masterminded by some members of the party who opposed his candidature before his election.

He said the members of National Council meeting that voted to suspend him are his avowed opponents who worked against his candidature ahead of the party’s congress to elect national officers.

“All those who voted at the Council meeting were against my candidature,” he argued.

The NPP also suspended its General Secretary, Kwabena Agyepong and Second Vice Chairman, Sammy Crabbe after that of Paul of Afoko. They were also suspended for “misconduct” which included a disregard for party structures.

The two are also seen as allies to Mr. Afoko.