This is coming at a time the minister has been touting his ability to put an end to a bedeviling four-year load shedding.

The load shedding which was nicknamed “dumsor” was an albatross on the neck of the government forcing the president to create a new ministry to tackle issues in the power sector.

Days after his appointment, Dr. Kwabena Donkor made a bold declaration, promising Ghanaians he will end the load shedding by the end of the year. He promised to resign if that was not achieved.

On Wednesday, December 30, 2015, his ministry issued a statement to announce an end to the load shedding.

“The Ministry of Power wishes inform the public that its Load Shedding programme in respect of electricity supply has been brought to an end,” the statement said.

The pronouncement was received with caution by some consumers and civil society groups notably the Africa Centre for Energy Policy (ACEP).

It appears the presidency is itself not convinced by the statement announcing an end to load shedding.

Joy News has learnt that Dr. Donkor has been asked to vacate his ministry, most likely, on January 1, 2016.

However sources at the Power Ministry say the Minister has not received any communication with regards to any dismissal.
.C54qTZu6.dpuf 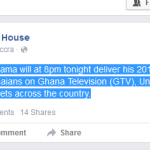