A key member of the ruling National Democratic Congress, Kofi Adams, is alleging that ex-President John Kufuor did not support 2016 NPP Flagbearer Nana Akufo-Addo when the latter was contesting the 2008 elections.

Addressing a gathering of party persons in the Northern Region, Adams told his faithful that it would be a huge mistake to accord Nana Addo the privilege of ruling Ghana, adding he’s a “failed dead okro.”

“When I say President Mahama is a fresh okro and Akufo-Addo is a failed dead okro, I will tell you why; even President Kufuor himself who knew the people he was working with never supported Akufo-Addo in 2007, he never did…It will be a monumental mistake to entrust the destiny of this country into Akufo-Addo’s hands.”

Twice a failed candidate, Akufo-Addo goes to the polls on November 7 against the sitting President John Mahama. It is a key point in the political career of the former Attorney General. 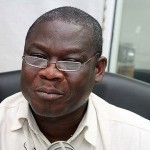