Four people have been arrested in Oforikrom, a suburb of Kumasi in the Ashanti region for allegedly siphoning fuel when a petrol tanker overturned in the area Saturday.

Residents of Oforikrom threw caution to the wind when they defied all odds and came out in their numbers on Saturday morning to scoop fuel on the street after a fuel tanker with registration number GM 6894-13 overturned at the Anloga Junction.

According to eyewitnesses, the vehicle believed to be traveling from Tema in the Greater Accra region with the load, was heading for the Northern region but the driver in an attempt to negotiate a curve at the Anloga junction traffic light lost his balance.

This resulted in the vehicle overturning and blocking part of the main road from the opposite direction leading to the fuel flowing on the ground.

Trotro and taxi drivers therefore took advantage of the situation to fill-up the tanks of their vehicles despite the danger it posed considering the fact that similar incidents in the past sparked fire leading to dozens of deaths.

At the time of going to press, Fire Service Personnel were at the scene to avert any unfortunate situation. 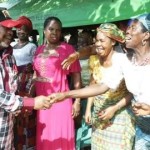