Deputy General Secretary of the ruling National Democratic Congress (NDC) party, Mr. Koku Anyidoho, has asked the opposition leader of the New Patriotic Party, Nana Akufo-Addo, to wake up from his sleep and stop the dreaming fake promises of providing one dam for every village in Ghana.

Speaking to GhanaPoliticsonline.com on the recent promise made by the flagbearer of the New Patriotic Party, that, he will create one dam in every village across the country, the Deputy General Secretary said Nana Addo is still sleeping and dreaming, that’s why he’s making so many impracticable promises.

Nana Addo on his tour in the North, promised to set up irrigation dam in every village in the North – a promise that is said to be in the NPP’s manifesto.

But according to Mr. Anyidoho, if Ghanaians don’t take care, very soon, the opposition leader will promise “one region one Ghanaian.

He should, make peace with Afoko, Kwabena Agyapong, and others, because, you can’t continue fighting people in-house and be promising to fix Ghana.” 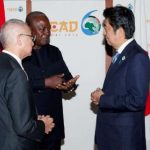