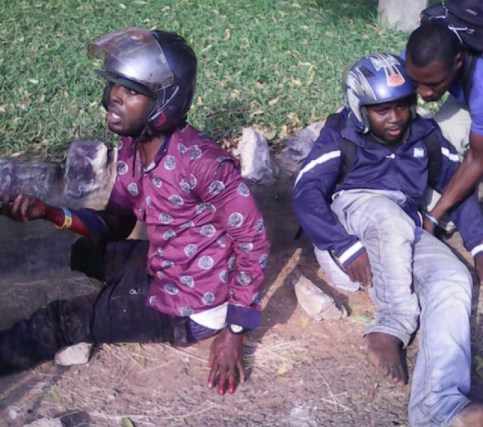 The broad day light Koala Supermarket robbery has taken a new twist as your authoritative newspaper, The Republic,(www.GhanaPoliticsOnline.Com) can reveal that one of the robbers is a brother to New Patriotic Party (NPP) chieftain and former Member of Parliament, Sheikh I.C Quaye.

In the past, top ranking members of the NPP, including the current Flagbearer, Nana Akufo Addo, have been linked to various dubious characters, including drug dealers and tricksters.

In this case, IC Quaye is directly linked by family ties to one of the Koala robbery suspect.

Investigations by this paper into the backgrounds of the two robbers who shot a Koala worker in broad daylight at Cantonments in Accra, have revealed that one of the robbers, Oko Quaicoo -30, who was the rider of the motor cycle used during the operation, is a brother of Sheikh Ibrahim Cudjoe Quaye, former MP of Ayawaso Central Constituency in the Greater Accra Region.
Oko Quaicoo, a motor mechanic according to our investigations, became frustrated after the death of their father some years ago when IC Quaye who better known in political circles as ‘Agbenaa’ (and also known for his “Stealers” coinage to refer to corrupt public officials) became the head of the family and started maltreating the family members.

Close sources to the robbery suspect told the Republic investigative team that the two time Regional Minister of Greater Accra Region  under former President John Kufuor from 2001 to 2008, seized properties belonging to the entire family,  including plots of lands from his siblings.

Our investigations further revealed that after I C Quaye took possession of the family properties, he refused to share the properties left behind by their father among them according to traditions which led to an internal conflict between himself and his siblings.

Oko Quaicoo who could no longer bear the humiliation and maltreatment meted out to them by their elder brother, is reported to have left the family and the properties and became a motor mechanic apprentice at Kasoa.

During the apprenticeship, Oko Quaicoo who had no support anywhere joined bad guys in the area to engage in criminal activities to survive, our investigations reveal.

After qualifying as a motor mechanic he continued with the criminal trade around Kasoa until his recent arrest. According to our sources, he had had a series of cases at the Kasoa police station including snatching of motor cycle he repaired from unsuspecting costumers.

Over the weekend, Oko and his accomplice who shot their victim in an attempt to snatch her bag on were busted after a fearless taxi driver who witnessed the robbery, gave them a hot chase and rammed his taxi into them and incapacitating them. The Police appeared on the scene afterwards to take control of the situation and arrest the robbers.

The taxi driver, Nana Yaw, who was given a presidential treat at the Flagstaff House on Monday was subsequently rewarded a house by President Mahama for his bravery and patriotism.

Koala Supermarket whose employee was carrying the money and was shot during the robbery which was foiled also honoured its promised and has presented a brand new Chevrolet Optra (Sedan) Saloon car to the brave taxi driver.