The Kintampo Government Hospital authorities are threatening mass burial for unidentified bodies at the hospital’s morgue.

Some unclaimed bodies from last Wednesday’s road tragedy that claimed 63 lives, are going bad according to Dr. Owusu Fosu, the Medical Superintendent of the hospital.

Inadequate space in a mortuary with a capacity of 15 persons, weak refrigeration system, low voltage and the resultant stench has forced the Hospital to arrive at this decision.

According to Adom FM’s Wiafe Akenteng, as at Thursday most families were unable to convey the bodies of their identified relations, as it was late in the night to complete the necessary paperwork.

Last week, 35 accident victims of another road accident were admitted at the Hospital, has contributed to stretching the Hospital’s emergency drugs.

Dr. Fosu said the Hospital’s National Health Insurance Scheme (NHIS) indebtedness is also to blame for the Hospital’s inability to get emergency drugs.

A non-governmental organisation, IQRA Foundation, was on hand to offer relief by donating some items to the Hospital. The Foundation also promised to engage their sponsors in Saudi Arabia to secure an ambulance for the Hospital.

The current ambulance used was donated by Alhaji Asuma Banda in 2006 and has no siren and in deplorable condition. 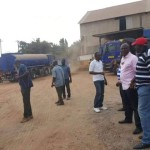