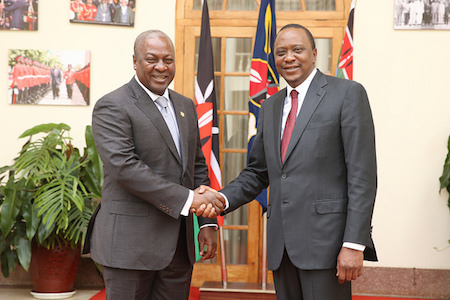 The Kenyan President has been invited by his Ghanaian counterpart to join in the nation’s celebration of the 59th anniversary of its independence.

This came to light when President John Mahama presented letters of credence to the immediate past director of state Protocol Ambassador Kwame Tenkorang who now resumes duties as Ghana’s ambassador to Kenya.

President John Mahama tasked his new ambassador to immediately work towards making the visit a success.

It is recalled that President Mahama was the guest of the Kenyan President last year during their independence celebrations and the invitation is a reciprocal one aimed at strengthening the ties that exist between the two countries.

“One of the first things you should be working on when you get to Kenya is the visit of President Uhuru Kenyata to Ghana as our special guest for our independence celebrations,” President Mahama indicated.

President Mahama who described his former director of state protocol as a very capable hand expressed confidence in his abilities as he takes on a new role.

Ambassador Kwame Tenkorang who comes to the job with 40 years of experience as a diplomat told Citi News he will bring to bear his rich experience on his new job.