John Mahama, Chair of the Commonwealth Observer Group in Kenya and former President of Ghana, has commended Kenyans for their patience in waiting for final election results. In his interim statement, he asked for continued patience as results continue to be finalised.

“We have followed the whole process and wish to congratulate all on the process thus far. It is my fervent hope and expectation that the positive, peaceful and orderly atmosphere that we all experienced on 8 August 2017 will continue to prevail as we await the conclusion of this electoral process,” he stated.

“Our overall conclusion is that the opening, voting, closing and counting process at the polling stations on 8 August 2017 were credible, transparent and inclusive. We commend and congratulate Kenyan voters, the staff of the Independent Electoral and Boundaries Commission, political party agents, candidates’ agents, the media and all security personnel for their commitment to the democratic process,” he concluded.

The complex election for six levels of government, undertaken at a cost that is reported to have made it one of the most expensive per capita elections ever, is still not over. But it is producing results. Kenya, for the first time, has a number of women governors. Additional history has been made in the North Eastern district bordering with Somalia, where a woman was elected as MP. Again, it’s a first.

But two days after the polls have closed, all eyes are on the still-contested Presidential race, after the leader of the opposition, Raila Odinga, declared that the transmission system had been hacked and the figures broadcast from the national tallying centre were false. The tone of his complaint, its public nature and the risk that such statements might cause followers to take to the streets raised immediate alarm. In his western heartland of Kisumu, there were tyre burnings and clashes. A few violent deaths have occurred over the election period although initial reports suggest these may have happened during attempts at looting.

Kenya is not a country where allegations of election fraud can be taken lightly. In his interim statement Mr. Mahama said Mr. Odinga’s claim has been taken seriously. But, he continued, “we are mindful that the process of collating the results is still on-going. I wish to reiterate my earlier call for leadership, and I therefore call upon all political party leaders and their supporters to show restraint and magnanimity as the results process continues to unfold. It is vital that all political leaders maintain peace and calm, exercise patience and not stampede the process.”

Mr. Mahama emphasised, in common with all other international Observer Groups present for the election, that the electronic transmission is only one part of the process, that the numbers known through that system are provisional, and that the Independent Electoral and Boundaries Commission (IEBC), have been clear that the final result for the Presidency will only be announced after verification using the paper forms. These forms were signed off at polling stations by officials and party agents. More than thirty thousand scans of these documents are now being checked in the presence of party representatives.

Mr. Mahama, who has himself had elections contested in courts and who lost office last year in Ghana, said that the IEBC should be given time by politicians to complete all the established processes. If there are still issues, then candidates can take the issue to the courts. Praising the election process so far, and the patience of the Kenyan people who often experienced long queues and delays, he said an election dispute is not worth the loss of a single life. 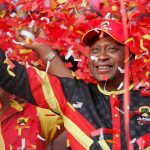