The Supreme Court in Kenya has annulled the result of the country’s presidential election held in 2017.

The court cited irregularities and indicated that a new poll should be organized within 60 days,.

However, some Ghanaians have congratulated former President John Mahama for doing a good job , whiles others are also blaming him and other thousands of observers that were there during the election.

Below is why we think John mahama and other observers did a good job and can not be blame .

• Kenya is a sovereign state
Kenya is a sovereign State so is Kenya. In kenya and many parts of the world, every country wants their autonomy to be respected. Kenya in this election petition and ruling showed the authority it has to govern itself.
play

This is to say the final decision rests with Kenya’s Supreme Court and not what observer missions say.
• The ruling by Kenya’s Supreme Court is based on evidence
In the law court, we are always told evidence is the name of the game. After the plaintiff filed the suit, he insisted during the hearing that the election results be audited.
Raila Odinga said that the results were manipulated after claims that the commission’s IT system had been hacked.
The Court then ordered the country’s electoral body Independent Electoral and Boundaries Commission (IEBC) to open up their server for an independent audit.
The audit report revealed that there was unauthorised and unidentifiable access granted into the Servers.

How were Mahama and other observer groups supposed to see this? Mind you the results were not compromised at the polling stations but rather at the backend of the servers.

Baroness Patricia Scotland, the Secretary General of the Commonwealth has praised Mr John Mahama and the Commonwealth Observer group for the commendable way it observed the recent elections in Kenya. Speaking on BBC, the Secretary General said the members of group perfectly executed the role assigned them by the Commonwealth Secretariat. She said accusations that the group and other observer groups did not present accurate report about the recently held elections in Kenya per the supreme court ruling are unfounded. She said observer groups perform specific roles which are different from duties electoral commissions are mandated by their constitutions to perform. She said basically, the Commonwealth observer group assess whether an election is in line with international standard, highlight specific recommendations for improvement, and demonstrate the support of the international community for genuine democratic elections. She said the Commonwealth observer group led by former President Mahama, excellently performed the role assigned it and the methods the group adopted are clearly defined in the declaration of principles for international election observation. She said issues concerning electoral technicalities such as transfer of votes

Issues about the server log etc were handled by the electoral commission. She said the constitution of Kenya mandates its electoral commission to perform certain specific duties which are technically different from what the observer group was assigned to do in Kenya.

She advised, people making conclusive statements about the election based on the supreme courts ruling to wait for the full judgement (report). She said all the constitution of Kenya guarantees aggrieved parties or persons to seek for legal redress and that point was clearly made by Former President John Mahama in his post elections statement. This was what President Mahama said in his final statement

“If there are still issues, then candidates can take the issue to the COURTS”

Asked if she still have confidence in the team the Commonwealth dispatched to Kenya per the supreme Court’s ruling, she said she has absolute confidence in the team. Voters exercised their franchise without intimidation, votes were freely counted, there were no incidence of box snatching and other negative practices recorded in previous elections. For the first time in Kenyan elections all the competing parties and other stakeholders adhered strictly to all the guidelines. 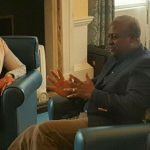