Managing Editor of the Insight Newspaper has said claims that accepting two former Guantanamo Bay detainees is righting the wrong of the United States are a fallacy.

According to Kwesi Pratt, keeping the ex-prisoners in Ghana still violates their rights which can, in no way be justified.

Government’s decision to accept two Guantanamo Bay detainees in the country for two years has been sharply criticized by many.

The two – Mahmud Umar Muhammad Bin Atef and Khalid Muhammad Salih Al-Dhuby – have been in detention for 14 years after being picked up in Afghanistan and suspected to have been linked to the terrorist group Al-Qaeda.
Most commentators including the clergy have demanded the two suspects be repatriated to their home country, Yemen, because they pose a threat to Ghanaians.

However, government and its spokespersons have sternly defended their decision, saying the ex-prisoners pose no threat.

A member of the NDC legal team, Abraham Amaliba argued that one of government’s reasons for accepting the former inmates of Guantanamo Bay was to correct wrongs perpetrated by the United States of America.

He opined that some of the detainees were wrongly detained as terror suspects, therefore, there was the need to right the wrong.

“They are not terrorists,” he said, adding “they were only rounded up and made to go to detention camp for 14 years but the US could not find any act of terrorism against them.

“It is therefore wrong for someone to label them as terrorists,” he asserted. What we are doing is righting the wrong” caused by the US, he stated.

Kwesi Pratt, however says this is wrong and totally unacceptable. He believes that Ghana’s acceptance of the detainees is just as worse as America locking them up for 14 years without trial.

“In my view I think that bringing them to Ghana is a continuation of the violation of their rights,” Mr Pratt said on Peace FM’s morning show, ‘Kokroko’.

He said it was necessary for government and the Foreign Ministry to come clear and explain why they took decided without seeking the views of the populace.

When asked whether it is possible for the ex-prisoners to be returned to their home country, Kwesi Pratt said he doubts.

“We need permission and co-operation from the US government to take them back and we will not get that. And for me that is a major problem,” he said.

He said it was necessary for government to defend and protect the country’s national dignity, he said adding, our willingness to adhere with International laws “does not mean we should accept things anyhow.

“How can we do that to ourselves as a people, we have to address how we do these things otherwise we (Africa) will remain underdogs,” he stressed. 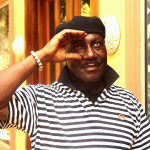