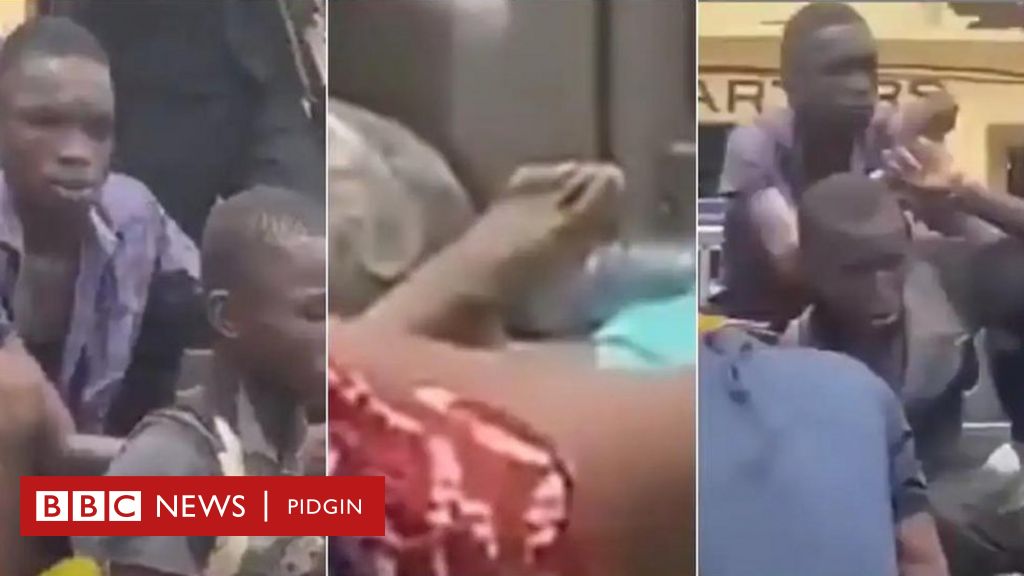 The suspects after their arrest by officers if the Kasoa Divisional Police Command
The Ghana Police Service on Sunday evening released its first official statement on the widely reported Kasoa ritual murder incident.

The police whiles clarifying the name and age of the deceased as Ishmael Mensah who was 11-years-old also confirmed the identities of the two suspects.

Media reports identified the deceased as Ishmael and his age as 10 years.
The police statement also confirmed that the suspects had violently killed Ishmael and had planned to use his body parts for ritual purposes.

Meanwhile, GhanaWeb visited the family house of the deceased and spoke to his father who said the family will use other means to achieve justice if the law does not take its course.

Read the Police statement below:
On 3/4/2021 at 10:15 am, the Kasoa Divisional Command received a distress call that there has been a ritual murder at Coca Cola near Lamptey Mills, a suburb of Kasoa.
Police proceeded to the crime scene and saw a young boy wearing a blue shirt and red/white pair of knickers dead in a pool of blood in an uncompleted building.
Initial investigation conducted by police revealed that, the deceased name was Ishmael Mensah age 11, and that about 0930 hours the same day suspects Felix Nyarko and Nicholas Kini aged 16 and 17 years respectively, invited the deceased to the uncompleted building and hit him with a club and cement blocks killing him instantly.
Suspects after that buried deceased in the uncompleted building awaiting his removal in the night for ritual purpose.
The body of the deceased has since been deposited at the Police hospital mortuary awaiting post-mortem whilst suspects have been detained to assist police with investigation.
The investigation is ongoing.
-END-
‘We’ll take the law into our hands if we don’t get justice’ – Kasoa murder victim’s father
When GhanaWeb’s Ekow Arthur-Aidoo, visited the family on Sunday, April 4, 2021, Frank Mensah Blanger, father of the deceased stated that he is ready to pursue the case to its logical conclusion.
He said, his son called him on Friday from where he works at the Oti Region, stating that he misses him so he should try and come home.
He said when he gets the chance from work, he will come to Kasoa to visit them.
“I set off from Oti Region to Kasoa very late and arrived in the morning. When I arrived, they were asleep so his mom woke him up to inform him about my arrival. Immediately he heard that, he woke up from his sleep and came to hug me.
“I asked what he’s got for me, he brought out an egg saying they kept it for me. I took it, his mother prepared breakfast for us. We all ate together, I told him I was tired because of the long journey so I wanted to rest for a while,” Mensah Blanger narrated.