The governing National Democratic Congress (NDC) says comments by Supreme Court Justice, Jones Dotse over a recent ruling on cleaning the voters’ register, is not different from the position of the Electoral Commission (EC).

Justice Jones Dotse in an interview said the Court was clear in ordering the removal of names of National Health Insurance Scheme (NHIS) card holders from the voters’ register, settling a controversial debate over the judgment.

“We said the use of the NHIS card is, therefore, unconstitutional and so they should take the opportunity to clear the register of those undesirable persons…period,that’s it”. He stated further, he does not “want to interpret the judgment” indicting “If anybody is aggrieved, let them come back to the court”.

But Deputy General Secretary for the NDC, Koku Anyidoho told Atinka FM Friday, May 27, 2016 that “Justice Dotse has not said anything different from what the Electoral Commission is saying in respect of the NPP and Abu Ramadan’s botched attempt to stampede the EC into doing the wrong thing against the grain of the Constitution of Ghana.”http://ghanapoliticsonline.com

“He is just re-stating the point that the EC has the mandate to clean the register per its modus operandi. The NDC will not buy into the attempt by the NPP to set the NDC against Justice Dotse. The NDC shall stay above the evil agenda of the NPP.”

According to Mr. Anyidoho, the opposition New Patriotic Party (NPP) “is embarrassed that it has been tagged as the Party that is antagonizing state institutions, and they want us to join them in that dirty agenda.”

The NPP has insulted Mrs. Charlotte Osei and the EC so badly so they want that NDC to insult Justice Dotse and the Supreme Court but it will not happen.

“The NPP is embarrassed that it has been tagged as antagonizing state institutions, and they want us to join them in that dirty agenda. NDC will live above this bait.”

He said the “NDC will rather expose the mischief of the section of the media that is pushing the NPP’s dog-fight agenda and will not go after the Supreme Court nor Justice Dotse.”

“The learned Justice Dotse stayed committed to the decision of the Supreme Court in his interview. The NDC applauds Justice Dotse for not betraying his colleagues and his profession in spite of the fact an ambush that was laid for him!” 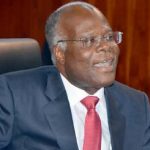