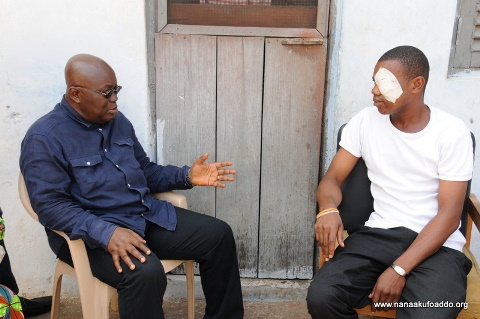 Nana Addo Dankwa Akufo-Addo, the 2016 presidential candidate of the New Patriotic Party, on Tuesday, September 22, paid a visit to Justice Adzakumah, the 36-year old young man who lost one of his eyes as a result of police brutality in the September 16 demonstration for a new voters’ register. At the Nima New Town residence of Justice Adzakumah, Nana Akufo-Addo explained that after being informed of the unfortunate events of September 16, whilst on the “Rise and Build Tour” of the Upper East Region, and what had happenedto Justice, in particular, he made it a point to visit him on his return to Accra.

The NPP flagbearer expressed his deepest sympathies to Justice and his family, who, he said, had sacrificed so much for the common cause of Ghana. “You have joined a long line of Ghanaian patriots who have had to sacrifice to get us where we are now. There is a long line of people who, like you, spilled their blood for our country. One day when we are mentioning the names of Ghanaian freedom fighters and democrats, they will mention your name. You made a huge sacrifice for our nation,” Nana Akufo-Addo noted.

He was of the hope that the Ghanaian people would not have to go through anymore of such horrible experiences, adding that “we are praying that things like this become less and less frequent in our history.” Nana Akufo-Addo also donated an undisclosed amount of cash to Justice, to aid him in his medical expenses. Justice Adzakumah, whose wife and 18 month-old baby were present, thanked Nana Akufo-Addo for taking the time to visit him “in my little corner.” He indicated that he remained unperturbed by what had happened, because he believed that what he and the thousands of Ghanaians, who turned up at the September 16 demonstration, are fighting for is the safeguarding of Ghana’s democracy through the conduct of credible elections.`

Also present at Justice Adzakumah’s residence were David Asante, Convener of the Let My Vote Count Alliance, and Gabby Asare Otchere-Darko, former Executive Director of the Danquah Institute, who also sustained injuries at the demonstration. Nana Akufo-Addo was accompanied by Saratu Atta, his Executive Assistant, another victim of the police brutality at the demonstration; Eugene Arhin, Press Secretary; and Iddrisu Musah ‘Superior’, his Campaign Aide.