The Editor in chief of the Crusading Guide newspaper Kweku Baako Junior has said he foresees some of the judges implicated in the judicial corruption scandal going to jail.

In his view, the scare of contempt being used by some of the implicated judges is not enough to reduce the effect of the crimes they are alleged to have committed.

Speaking on Newsfile on Joy FM Saturday, Baako urged Ghanaians to be patient and not be unduly worried about the developments emanating out of the scandal.

“Contempt phobia can’t stop the momentum that this Anas video has brought on the nation.

“I am not unduly worried at all about the legal writs, public viewing and all the controversies; they will eventually drive this country to a more qualitative way of resolving problems.

“The chief justice has initiated the process and I see it in my mind’s eye that a lot more will happen. Justice Derry and his friends are in court, it’s legitimate; they should be patient. The process maybe slow but we must be patient about it” he said.

He added: “Anas’ project has been name, shame and jail and these particular one will have to go through that exercise too.

“And those who have been cited for contempt; assuming without admitting that there is a legitimate basis, and some of us end up in jail, I can see some of those judges joining them there”.

Already 22 judges and magistrates who were implicated in the corruption expose’ have been suspended by the Judicial Council. The High court judges who were also caught on camera taking bribes to decide on cases before them are also being probed.

The chief justice has promised no judge found guilty will be spared. 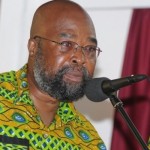