This is according to a Former Deputy Minister of Education, Samuel Okudzeto Ablakwa.
Speaking on Accra-based Asempa FM Ablakwa said the NDC must improve the communication strategies of the party for Ghanaians to know what they achieved during their tenure.

“Free SHS is not starting in Ghana on the 11th of September this year, it is not President Akufo-Addo who is starting free SHS and many people don’t know this. Free SHS was started in the year 2014, three years ago. The NDC under [former] President Mahama started free SHS.”

“We had a loan facility from the World Bank under the Secondary Education Improvement Programme. Under this there were four components; the first was to build the 23 senior high schools, the second component is the training we provided for Maths, Science and ICT teachers, and there was a third component called Quality Improvement Facility upgrade, and the fourth categorically was the scholarships for needy Senor High School students. The agreement we signed with the World Bank for the next five years at that time – 2014 to 2019 – was on granting scholarships, and implementing free SHS for 10,400 students,” he added.

He was speaking after the Nana Addo-led government announced that the Free SHS programme will commence in September 2017 with the year students in all public High Schools in the country.

At a press conference in Accra, Deputy Minister of Education, Dr Yaw Osei Adutwum, said parents should not pay any fees demanded by heads of senior high schools since the government is taking care of all such expenses.
“Even if PTA meets and decides in consultation with GES that there is something they want to do and they want parents to contribute, it will not be mandatory. If Mr Kojo Mensah doesn’t have money to make that contribution for his ward, the student will not be prevented from going to school,” he said. 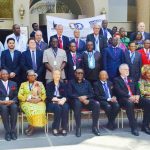