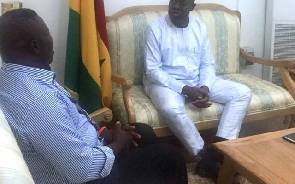 President John Mahama has pledged to give a house to the taxi driver who foiled a robbery attack on a female Koala employee at Cantonments in Accra on Saturday by ramming his taxi into a motor bike that was conveying two suspects who had shot the victim in the thigh.

The Vice-President, Kwesi Amissah-Arthur, disclosed this when he hosted the taxi driver, Nana Yaw, at the Flagstaff House on Monday.

Mr Amissah-Arthur joined thousands of other Ghanaians to commend the driver for his patriot and heroic act.

The Director General of the Criminals Investigations Department (CID) of the Ghana Police Service, Commissioner of Police (COP), Mr Prosper Agblor, had earlier commended the taxi driver for his bravery, pledging that the damaged taxi would be repaired by the police.

Meanwhile the management of Koala has pledged to purchase a new car for the taxi driver.

It also stated that its employee who was attacked was not transporting money to the bank as had been reported by a section of the media.

Four persons have been arrested in connection with the attempted robbery.

They are the Supervisor of the Cantonments branch of the Koala Supermarkets, a security man at ACACIA Construction Firm at Cantonments, and two suspected armed robbers, Stanley Obaleko, alias Suleiman Mohammed, 35, a Nigerian, and Oko Quarcoo, 30, a Ghanaian.

The supervisor, Gilbert Osabutey, 36, from Koala and his accomplice, Doe Ahiatafu, 28, a security man, were said to have masterminded the robbery operation.