NDC is a party which doesn’t lie, we don’t tell lies. We don’t promise on what we can’t fulfill and if we can, we will promise on that……. I do remember during the campaign period they promised to give each constituency one million dollars, but we were in power and I made them know such isn’t possible, but they said Oh they can do it,” these are the words of the former President of Ghana, John Dramani Mahama.

The former President was addressing scores of National Democratic Congress (NDC) activists at the Unity Walk at Tarkwa in the Western Region today, November 25.

This is the fourth in a series of walks after similar events were held in Accra, Tamale and Cape Coast.

According to Mr Mahama, the NDC knew that most of the promises made by the NPP, especially the assurance of giving each constituency one million dollars, prior to the 2016 elections, were not feasible and only aimed at wooing Ghanaians to vote for them.

As part of plans to industrialize and transform the Ghanaian economy, then candidate Nana Akufo-Addo, indicated his government’s plans to help establish a factory in each of the 216 districts across the country.

Nana Akufo-Addo also promised to establish one dam in every village in the northern part of the country to boost agriculture through a well planed irrigation policy.

The NPP Flagbearer also promised to create another region from the Western Region, should he emerge winner in the December polls among others.

His promises were however met with questions of feasibility and criticism from the governing NDC with the party largely accusing him of pandering for votes.

The party’s flagship programme, the free SHS policy, was however implemented in September this year.

But at the NDC’s Unity Walk in Tarkwa on Saturday, former President Mahama revisited the issue saying Ghanaians are “disappointed” in the NPP for its “fake promises”. 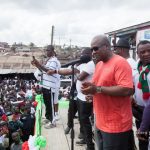 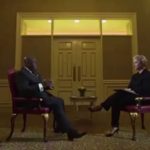