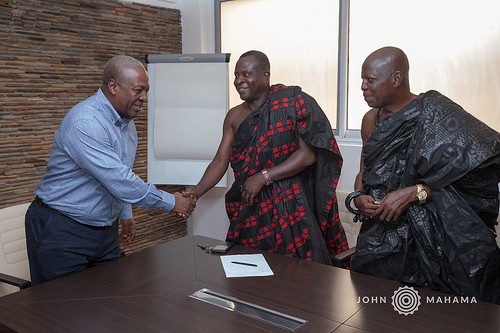 The family officially paid a courtesy call on Mr. Mahama since the late minister was a well-known and respected individual who once served in the NDC administration. Speaking on behalf of the family, Prof. S. Awuasah-Nyamekye noted that the late J.H Owusu-Acheampong will be buried on September 2.

The former President assured the family of late J.H. Owusu-Acheampong that the National Democratic Congress will give their departed comrade a befitting funeral ceremony.

John Mahama eulogised Mr. Owusu Acheampong as one who mentored a number of the NDC members and thus thanked the delegation for officially informing the party.

The late Owusu Acheampong was the Abusuapanin of the Akwamu division of Berekum.

Owusu Acheampong came into public life when he served as the Brong Ahafo Regional Secretary (minister), during the PNDC era from 1988 to 1993.