Relatives of the late Member of Parliament for Abuakwa North, JB Danquah-Adu, have appealed to the New Patriotic Party (NPP) government to fast-track processes leading to finding the real killers of the MP.

On 9 February 2016, some unknown assailants murdered the late MP in his room at his Shiashie residence.

Daniel Asiedu and Vincent Bossu are facing murder charges for the murder but speaking to Class News, a family elder from Kyebi-Adadientem, Obaapayin Nana Anima Odaa, called on President Nana Akufo-Addo to, as a matter of urgency, fast-track proceedings at the court to boost the confidence of the family members.

“We are appealing to him that the case is being delayed. Since last year February 9, next week Thursday will be one year and up till date we haven’t received any concrete answer from anybody. If the guy [suspect] goes to the court, he will just go and be joking there. Telling the court they should allow him to go and visit his wife because his wife is pregnant. Now his wife has delivered so they should allow him to go and see his new born baby, the food they’ve been giving him he doesn’t like it. They wanted to kill him that’s why they are giving him that food, a whole lot of stories…” she bemoaned.

The case was adjourned to February 15, 2017 at the last hearing. 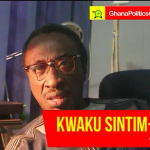