“I don’t think a cripple can lead a political party,” he said.

Jantuah was speaking in an exclusive interview marking the 50th anniversary of the overthrow of Osagyefo’s government with Ghtoday hosts Kafui Dey and Baisiwa Dowuona Hammond in Kumasi.

According to him, the current crop of CPP members do not have the gravitas nor have they fully embraced the “Socialist Ideology that Osagyefo propagated”.

“The CPP itself is no more. It’s not functioning,” said a disappointed Jantuah.

“If you have a CPP with a leader who is a crippled…I wonder how he is going to rule,” he states with curiosity.

‘’You stand tall before persons with disability in Ghana and Africa at large, hence you are not only our role model but you have become the beacon of hope for us Persons With Disability ( PWDs),” Chairman of GDF, Mr Alex Tetteh, stated.

Meanwhile, F.A Jantuah is not convinced this is possible “but he has to walk also…have the capacity to walk and go places and talk”.

He however thinks Dr. Agyeman Badu Akosa “would have been better because he is not a cripple 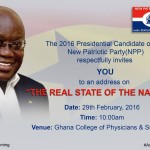