Acting General Secretary of the New Patriotic Party (NPP), John Boadu, has posited that, it will be extremely surprising for anyone (party members) to challenge President Nana Akufo-Addo in the party’s presidential primaries in 2020.

According to John Boadu, it will be strange for anyone to contest the president due to his impressive performance just in a year after taking over from Mr. Mahama.

He however clarified that, the party’s constitution stipulates that, ‘’whenever we are in government, we should organize our presidential primaries not later than 12 months before the general elections and we have about 48 months away,’’ he told Accra based Joy FM.

He said the president hasn’t indicated he will stand again and ‘’when we get there…we will open nomination as we normally do for prospective aspirants who have the intention of standing on our ticket, to put in their application. If by God’s grace he is the only person who puts in an application, or he intends to contest again, why not?’’

‘’If any other person also put in application- which would be strange considering the performance he has put up only in one year; the kind of things he has done in one year, by that time; even other opponents of the party may not put in an application to contest him. How much more internally?’’ 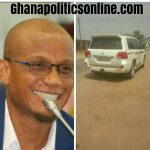