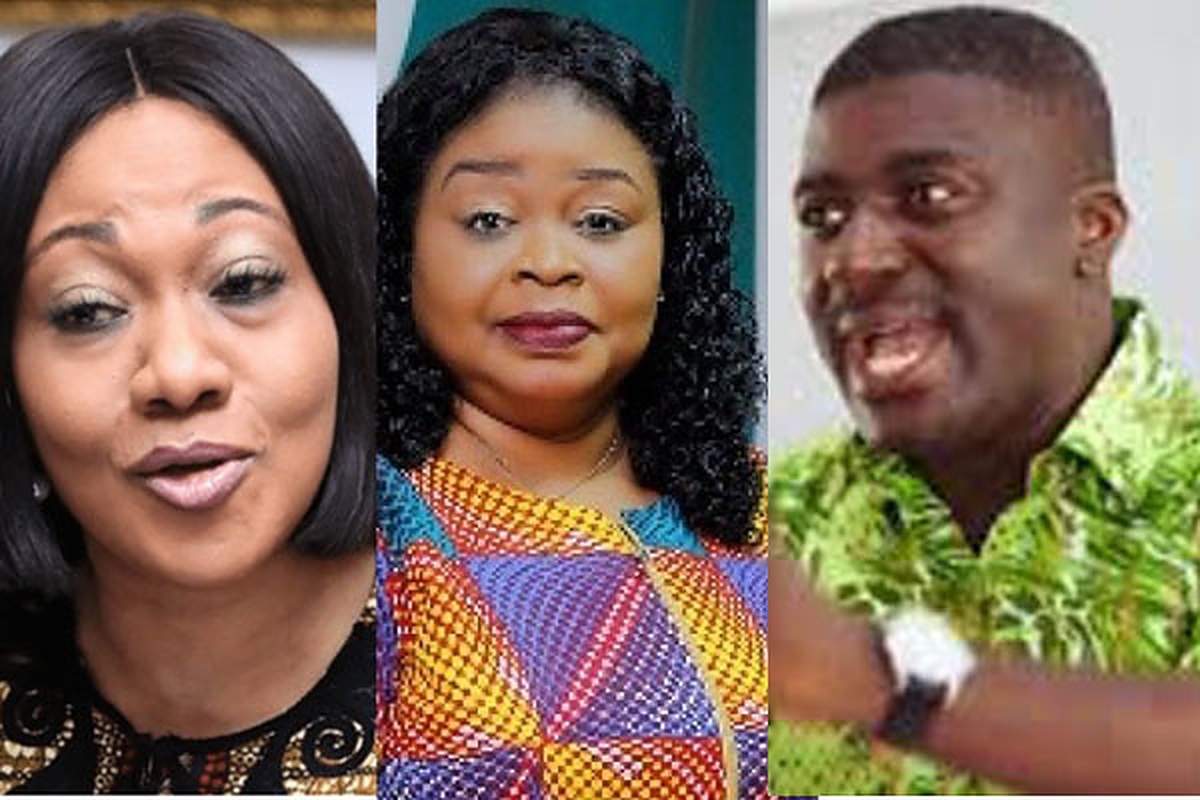 Ghana’s Electoral Commission (EC) continues to manifest the lack of accountability and impunity which has engulfed every facet of the nation under President Akufo-Addo.

As sections of the citizens are in the streets across the country demanding clarity from the leadership of the commission led by Jean Mensa and Bossman Asare after their shambolic organization of the Monday, December 7, 2020 parliamentary and presidential elections, they in turn continue to threat the people with contempt refusing to render any explanation.

There have been miscalculation of results, figures in words are not matching with figures in numbers, some parliamentary candidates, including Francis Dodovi, who contested the Suame Constituency seat in Ashanti Region, have had his name and score appearing in the Eastern Region, as having rather contested Osei Bonsu Amoah of the Akwapim South seat, but no explanation has been offered Ghanaians why Winston Kwadwo Afari-Djan’s went missing on the EC’s certified result.

The EC, has announced it is going on break from active work for the Christmas festivities, but some seem to have seen through the actions of the EC and questioned its attempt to run away from the NDC.

According to a statement signed by the Deputy Chairman of Corporate Services at the EC, Dr Eric Bossman Asare, the Commission is expected to break today Wednesday December 23, 2020 and will resume active office duties on Tuesday January 19, 2021.

“Following the successful and peaceful conduct of the 2020 Presidential and Parliamentary Elections, Management has decided that the Commission will break for Christmas and New Year on Wednesday, 23rd December 2020 and resume duty on Tuesday, 19th January 2021,” the notice read.

It continued “On behalf of the Electoral Commission, I wish you All a Merry Christmas and a Happy and Prosperous New Year”, the statement issued on Monday night said.

Again, ahead of the polls, Dr. Grace Ayensu-Danquah, Joe Ghartey and Frank Cobbinah, were published on the notice of poll and the ballot paper as the Parliamentary candidates for National Democratic Congress (NDC), the New Patriotic Party (NPP) and the Ghana Union Movement (GUM) in the Essikado-Ketan contest, but after the ballot, three more names appeared on the certified results from the EC.

The new names that surreptitiously appeared with percentages allotted them, included Samuek Abokyi, Asamoah Agyeman and Sadick Sarfo as candidates for Akua Donkor’s Ghana Freedom Party (GFP), the People’s National Convention (PNC) and Konadu Agyeman’s National Democratic Party (NDP) but again no explanation has been given to the source of the new names and percentages.

The popular shrine keeper, Nana Kwaku Bonsam, contested in the 2020 election as an independent parliamentary candidate for Offinso North in the Ashanti, however, the EC’s certified result mentioned him as a candidate for the Great Consolidated Popular Party (GCPP), but again no explanation has been offered the EC.

Figures from EC regional offices are different from the certified result from the EC headquarters, with some Parliamentary seats including disputed Techiman South constituency remain outstanding following dispute sparked by the official of the EC and again the leadership of the commission is not offering any explanation making the National Democratic Congress (NDC) rejection of the polls as “flawed”, “fictionalized” and “rigged” in favour of President Akufo-Addo, more justified.

On the letter announcing the break, investigations have revealed that this is the first time the EC is making public it plans to go on break, and this has raised eyebrows with many asking why the rush while others described it as snobbish coming amid the nationwide protests by the NDC.

Interestingly, some temporary staff who were engaged by the EC during the Voter Exhibition exercise and the just-ended general election have questioned the basis of the EC’s break since the EC has not honoured it part of the contract signed with them by paying them their allowance.

Some of the staff who have been expressing total surprise about the EC’s action asked the EC to ensure that they pay them their money before the announced break begins today.

The EC ahead of the conduct of the December polls was allocated some GH¢701 million for the organization of the election by the Finance Minister Ken Ofori Atta.

Pouring out their frustration and sounding the alarm bells on social media after the statement announcing the EC Christmas break, some of the ex-temporal staff implored the general public to call the EC to order by making sure that they do the needful by paying them moneys due them so that they can celebrate the festivities just like Jean Mensa and Bossman Asare and their families.

Aside from the non-payment of temporary staff, the EC yesterday morning refused to receive a petition by the NDC Minority in Parliament over the disputed Techiman South parliamentary seat.

The Minority led by the Tamale South lawmaker, Haruna Iddrisu, were met with fierce resistance by the Police led by Kwesi Ofori.

The police had barricaded the road leading to the EC’s headquarters at Ridge in Accra, but after minutes of back and forth with the Police, the minority went back to Parliament without getting any official to present the petition to.

Interestingly, the EC which was unavailable to receive the NDC’s petition surfaced later in evening issuing two statements in a role clarifying issues of injuries to the Commission’s image.

The first statement was a claim by the Commission about a supposed video making the rounds on social media indicating that the chair of the EC, Jean Mensa, has declared the NDC flagbearer winner of the December elections. According to the EC, there is no iota of truth in the said video and called it “doctored”.

The statement signed by the “Electoral Commission” and published on the EC’s facebook page read “The attention of the Commission has been drawn to a video in circulation indicating that the Chairperson of the Electoral Commission announced Mr. John Dramani Mahama as Ghana’s President-Elect. The Commission states that the video is doctored and is not a true reflection of what was declared”.

The Commission will like to reiterate that Nana Addo Dankwa Akufo-Addo is the President-Elect of the 2020 Presidential Election having contained more than fifty per cent of the total number of valid votes cast as enshrined in Article 63.3 of the 1992 Constitution. This declaration has subsequently been gazzeted by the Ghana Publishing Company Limited (GPCL).

The aforementioned statement was followed with another statement this time reacting to the Minority’s presence at their offices.

The statement once again signed by the “Electoral Commission” said contrary to claims, the Commission did not receive prior notice of the coming of the MPs though they gathered the Minority will be presenting the petition.

“For the record, the Electoral Commission writes to inform the general that it did not receive prior notice of the said presentation of the petition from the Minority Caucus”.

According to the EC, even though the Minority indicated the day and time it was going to make the presentation; it gave “no notice to receive the Minority Caucus given that the Chairperson and her senior team were not in the office.

The letter gives the start time of the said presentation as 10:00 am, giving the Commission no notice to receive the Minority Caucus given that the Chairperson and her senior team were not in the office.

The questions Ghanaians are asking is that, how come both statements were not signed by a designated office as in previous releases from the Commission.

Syliva Annor Madam Sylvia Annor, Head of Public Affairs at the Electoral Commission, who has in time past, signed some of the statements, surreptitiously no longer signs statements from the Commission.

The Herald has sighted the said letter addressed to the EC by the Minority Leader captioned “Notice of presentation of petition by the Minority Caucus of Parliament” dated December 21, 2020.

The brief letter read “I write to inform you that the Minority Caucus will be walking from Parliament to the Office of the Electoral Commission in Accra on Tuesday, 22nd December 2020 at 10:00AM to present to the Commission a petition on the purported declaration of the results of the parliamentary elections for Techiman South”.

The Techiman South although has been declared in favour of NPP’s Martin Agyei Mensah Korsah is being disputed by the NDC which says its candidate Christopher Beyere won the seat. The Minority group layer after presented results of the pink sheet during a press conference. They insist they will stop at nothing until the seat is declared for the NDC.

It is not clear if the NPP majority will present its numbers or the party led by Freddie Blay, its chairman or General Secretary Boadu will do. 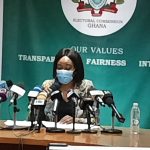 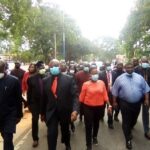