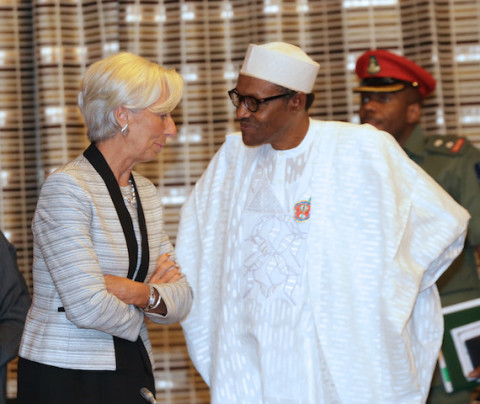 The International Monetary Fund is prepared to lend money to Nigeria and other countries facing economic crisis at zero interest rate in order to stimulate their recovery.

The Managing Director, IMF, Christine Largade, said this on Thursday in Washington DC, United States, at the ongoing annual meetings of the World Bank/IMF.

“If we want to improve the inequality issue, we must have a strong international safety net. In this context, I am pleased to reveal that our board recently approved the extension of the zero interest rate on all concessional facilities from 2016 to 2018, and thereafter, if there is a need for an extension,” she said.

Our correspondent, however, gathered from top Nigerian officials attending the meetings that the country was not favourably disposed to taking the IMF offer.

An official, who spoke to our correspondent on condition of anonymity, said, “The IMF people have been talking to us for some time, asking us to come and take loans, but their facilities come with too many unfavourable conditions.

“For instance, they told us to remove fuel subsidy and devalue the naira, which we did. If we take their fresh offer, they may ask us to raise the price of fuel and further devalue the currency, but these will create unrest in the country because the people are already suffering and we are aware of this.

“We will rather take a facility from the World Bank. The IMF facility comes with too many conditions; though we need a lot of funds to come into our economy now, we have to be wary of some of the tough conditions attached to them.”

Giving further details about the facility, the IMF boss said, “That is really important for low-income countries to be able to actually absorb the shocks without necessarily going to the international markets or relying on bilateral lending capacity of close to $1tn by extending access to bilateral borrowing agreements. The new agreements that are being signed this week will run at least through the end of 2019, and will continue to serve as a third line of defence.

“We have so far received pledges of $344bn from 26 members. We look forward to others joining the effort. We will provide more details shortly; and there will be some signing sessions organised in the course of the next two days.”

Lagarde also said that the outlook for advanced economies remained subdued, while that for the developing economies provided some guarded optimism with great diversities within the various economies.

She added, “Prospects for low income economies may be more challenging with varied outlook. We see growth as too low, too long and benefitting few. By exploiting synergies in policies, we can overcome these challenges. We also believe that each country has something to offer. My hope is that at the end of these meetings, each finance minister, each governor of central bank will go back home thinking of what to fuel growth.

“For example, when monetary policy has been overstretched, fiscal policy can step up. This will also put in place the structural reforms that are much needed, which have been sorted out in some countries, but which are still lacking in other places.”