IMANI Centre for Policy and Education has launched a report assessing the New Patriotic Party (NPP) government’s first year in office, based on promises made in their 2016 manifesto.

The launch of the report took place today [Wednesday], at the Tang Palace Hotel in Accra, and was attended by political party representatives and various stakeholders, who had the privilege to assess the report by making contributions and asking questions.

This year’s analysis, however, took a purely qualitative form with highlights and comments on government’s achievements so far.

It also identified gaps, challenges and offers some suggestions on the active implementation of the promises.

Data sources for the assessment included the 2016 Manifesto, 2017 and 2018 Budget Statements, the Coordinated Programmes for Economic and Social Development, and project and news reports.

The report, among others, revealed that promises relating to job creation was not encouraging.

“Despite the numerous promises targeted at creating massive employment, there is little evidence to suggest the actual number of jobs created in the ­first year,” it said.

On the other hand, performance in the agriculture sector was rated as “fairly good”, given the successful implementation of a number of programmes such as the Planting for Food and Jobs (PFJ), and the significant reduction in the prices of selected agricultural inputs.

The report, however, made mention of what was described as the slow pace in implementing projects relating to irrigation and fisheries.

On Governance, the report noted that, although the Office of the Special Prosecutor was established to help combat corruption and Public sensitization carried out in 2017, little progress was made on other anti-corruption measures on governance issues in the first year.

Under the education sector, the report highlighted government’s steps to implement most of its promises which included the implementation of the Free SHS policy among others.

It, however, said the policy had implementation challenges in the form of infrastructure de­ficit, congestion, inadequate furniture, high preference for boarding status among others. 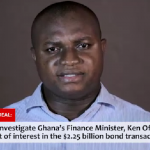