Former President John Agyekum Kufour has expressed sadness at the death of the Member of Parliament for Abuakwa North, Joseph Boakye Danquah, who as killed in his house in the wee hours of Tuesday.

“I’m so disturbed that I don’t even understand it,” he told Accra-based Asempa FM in the Twi language on Tuesday afternoon.

The former President, who made the late MP a Deputy Minister for Women and Children during his tenure, said he was shocked by the news of his death.
“It’s not good news. It’s not good news at all,” he added.

According to Ex-President Kufuour, the late Mr Danquah was a businessman who had a bright future ahead of him.
“He used to call me ‘father’,” he said, adding: “I don’t understand it. I don’t understand.”

Stressing that Mr Danquah’s death was a blow to the country, the former President urged members of the public to support the police to ensure that lives and property are protected.

Ex-President Kufuour sent out his condolences to the family, friends and supporters of the late MP.

Mr Danquah was stabbed multiple times by an unknown assailant (s) at his Shiashie residence in Accra, prompting the police to launch an investigation.

It is suspected that the assailant (s) used a ladder to climb to a roof linking to a terrace and then entered the MP’s bedroom through a window before stabbing him. 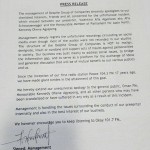