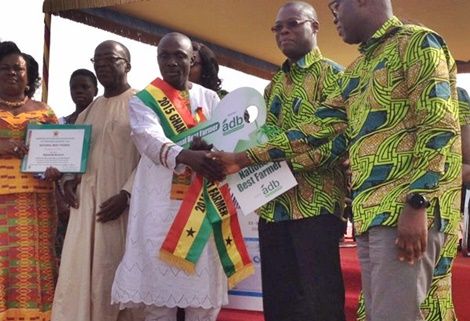 A 49-year-old man, Ibrahim Musah, has been adjudged the 2015 National Best Farmer at a ceremony held in Upper East regional capital, Bolgatanga.

Augustine Boateng from Asunafo North in the Brong Ahafo region was the first-runner up while Charity Akotia of Agona West in the Central region received a pick-up for coming third.

Ibrahim Musah who is based in the Brong Ahafo region, is a fisherman, cocoa farmer and he is into animal husbandry. He has 100 acres of cocoa farm among others including a tilapia farm.

Entitled to a house provided by the Agricultural Development Bank, the winner also takes home Gh¢ 3,000 cheque a laptop and a car among other prizes.

In other categories, the National Best livestock farmer went to Gideon Anabah of Bawku in the Upper East region

In the fisheries category, Ebenezer Afful was adjudged the national best fisherman. Kweku of Apam in the Central region came second while Isaac Kpobi of the Volta region was the second runner up.

About 78 farmers and fishermen were honoured Friday at the 31st National Farmers’ Day celebration in Bolgatanga.

This year’s event, which is on the theme: “Transform Ghana: Invest in Agriculture,” is focused on increasing private sector investment in the agricultural sector to transform the country’s rural economies and halt rural-urban migration.

Ghana’s vice president Kwesi Amissah-Arthur was unable to fly to the Upper East region to grace the 2015 National Farmers’ Day celebration in Bolgatanga due to bad weather.

The vice president was to represent President John Mahama who is currently in South Africa attending the Africa-China forum.

Last year, John Mahama delayed in attending the same event in the Western region due to a mechanical fault on aircraft carrying the president.