The Chief Executive Officer of Engineers and Planners (E&P), Ibrahim Mahama has accused the Ashanti Regional Chairman of the New Patriotic Party Bernard Antwi Boasiako popularly known as Chairman Wontumi of sabotaging him in order to settle personal scores.

According to Ibrahim Mahama, the scheme of Chairman Wontumi by organizing his boys to undermine Exton Cubic will not succeed as planned.

“Let’s support our own. The attempt by certain individuals especially the Ashanti Regional Chairman of NPP to whip up sentiments against the company by organizing his boys in the area to undermine Exton Cubic will surely not see the light of day”, he stated.

A statement from Ibrahim Mahama’s quarters has indicated that Exton Cubic Group Limited, the mining company in the centre of the recent Nyinahini Bauxite Concession saga is operating on a prospecting license making the statement from the Environmental Protection Agency (EPA) and the Minerals Commission flawed.

The statement debunked the EPA’s claims, describing them as untrue and not supported by the evidence available, adding that the EPA and the Minerals Commission should have done proper checks instead of acting on rumour.

“The statement from the Environmental Protection Agency (EPA) and the Minerals Commission are flawed. Exton Cubic is not engaged in mining. They’re prospecting and the prospecting permit was issued by the EPA on 07/06/2016. It’s regrettable the two state institutions acted based on a Newspaper publication (Daily Guide). The PRO of EPA shouldn’t have acted based on hearsay they should have visited the site and confirm if any prospecting law was broken. Prospecting has been going on since 2016 and the permit will expire in 2018,” they said.

The statement explained that Exton Cubic has been collaborating with stakeholders in the mining sector for about 4 years, complying with all procedures leading to their attainment for a mining lease.

They suggested that the “Minerals Commission will not give a Mining lease to a Company if you don’t submit your Prospecting permit.” A step that has already been taken by the Exton Cubic Group.

A prospecting license according to Ghana’s Mining Portal, “gives the holder the exclusive right to search for specific minerals (or commodities) by conducting geological, geophysical and geochemical investigations to determine the extent and economic value of any deposit within the license area.”

It adds that “Drilling, excavation or other sub-surface techniques are permitted under the prospecting license. The initial grant of the license is limited to three years and a maximum area of 750 contiguous blocks or 157.5 km².”

The EPA in a statement earlier suggested that Exton Cubic Group is not permitted to operate at the Nyinahini Bauxite Concession as they did not complete some requirements needed to gain the prospecting license.

“The EPA will like to clarify the position of the Exton Cubi Group Limited’s Environmental permit status under the Mining Lease. Exton Cubic Group has not obtained the required EPA permit under its mining lease and therefore any attempt to enter the area for mining activity is illegal,” it read.

“The company among other conditions was to notify the EPA as soon as prospecting activities commenced, and also to submit within three months from the date of issuance of the Environmental Permit a liability estimate of environmental degradation to enable the posting of the Reclamation Bond in line with Regulation 23 of the Environmental Assessment Regulation 1999 (LI 1652). Exton Cubic Group Limited, unfortunately, reneged on all these conditions. This, therefore, means that the prospecting permits are no longer valid,” the statement added.

However, the statement from Ibrahim Mahama’s quarters also debunked the EPAs claim that Exton Cubic Group failed to adhere to some instructions rendering their prospecting license null and void.

“Exton Cubic has applied for the permit to start mining. The first letter was sent to EPA on 20/03/2017 and a second request was sent on 18/07/2017 after EPA failed to respond to the March 20 letter. For that matter, it’s flawed for the EPA PRO to state that Exton Cubic failed to write to them for a mining permit,” they explained. 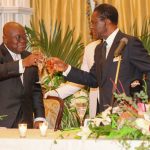