The Speaker of Parliament has refuted claims that he is plotting to dislodge Vice-President Kwesi Amissah-Arthur from office using a group called “Volta Youth For Development”.

Edward Kobby Doe Adjaho, also rubbished calls by certain individuals and groups to partner President John Dramani Mahama for the 2016 general elections as the National Democratic Congress (NDC) running mate. In an exclusive interview with The Herald via phone from London yesterday, the former Member of Parliament (MP) for Akatsi South in the Volta Region asked; “do you change a winning team?

Several times during the interview, the Speaker reiterated his confidence in the Mahama – Amissah-Arthur ticket to win the 2016 Presidential and Parliamentary elections for the NDC saying “Vice-President Kwesi Amissah-Arthur and several of his associates are aware of my stance.”

Mr. Adjaho, who has been in parliament since 1992, lamented how he had had to tell President Mahama; his onetime colleague in Parliament, Vice-President Amissah-Arthur, the National Security Coordinator and National Security Advisor to disassociate himself from any sinister maneuverings to become vice-president.

He denied knowledge of the group and warned its members, whom he doesn’t know, to immediately desist from using his name in their narrow-mindedness political quest.

The Speaker of Parliament spoke emphatically to The Herald saying “I won’t compete with my former lecturer for any position including the position of the Vice-President of Ghana.” This he said is because he had known and kept a “longstanding relationship with the Vice-President spanning over 30 years.”

Mr. Adzaho, disclosed that during his days at the University of Ghana, Legon, Mr. Amissah-Arthur was his Economics lecturer, adding that long before the VEEP became a Deputy Minister of Finance in the Jerry John Rawlings administration upon his return from Nigeria, they were very close.

They are there on the invitation of the British Parliament through Westminster Foundation For Democracy. They have had meetings with both houses of Parliament; The House of Commons and The House of Lords.

Volta Youth for Development, which claims to be non-partisan, has issued a statement describing Vice-President Kwesi Amissah-Arthur as an “incompetent” deputy to President John Mahama and called for his replacement with Speaker of Parliament, Edward Doe Adjaho.

Leader of the group, Prosper Fofo Ndekor has been on radio since Tuesday saying President Mahama and the governing NDC risk losing the 2016 general elections if the former Governor of the Central Bank is retained as running mate.

In the group’s estimation, the loyalty of the Volta Region to the NDC over the years must be rewarded with the selection of Mr Adjaho as running mate.

To buttress the group’s incompetence charge against Mr Amissah-Arthur, Mr Fofo Ndekor asked: “How many times do we hear of the activeness of the Vice President?”

He also cited a situation a few months ago, where foreign affairs Minister, Hanna Tetteh, represented the President at a forum held in Accra instead of the Vice-President doing so, a situation which forced former President Jerry Rawlings to raise a protest.

“It’s a clear indication that even the President knows his Vice-President is incompetent,” Mr Fofo Ndekor added 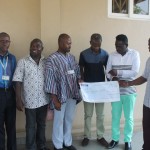