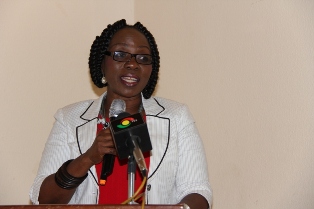 Former Corporate Affairs head of the Ghana National Petroleum Corporation (GNPC) and now head of the Stratcomm Africa has denied receiving any money from her former employers.

On the contrary, Esther Cobbah says she is owed significant amounts of money by the Corporation where she served for years managing the Public Relations arm of the company.

In a statement issued in Accra, Tuesday, Cobbah said the allegations being made against her were improper and that “no weapon fashioned against me by the making of such unjustifiable attacks will prosper.”

Member of Parliament for Adansi Asokwa KT Hammond alleged Ms Cobbah together with her husband Tsatsu Tsikata and two other former workers of the Corporation had been paid in excess of 2 million cedis.

He claimed Tsikata was paid an illegal sum of one million cedis whilst Cobbah was paid an amount 600.00 cedis.

He described the payments as criminal and charged the Speaker of Parliament, Edward Doe Adjaho, the president, John Mahama to conduct an investigation into the circumstances under which the payments were made.

The Board described the payments as ex-gratia benefits to the former employees who had worked tirelessly for the Corporation and whose appointment were terminated between 2000 and 2001.

“The four served the Corporation for periods ranging between 12 and 21 years. They were all removed from office in 2000 and 2001, under circumstances that did not allow for the payment of their respective accumulated separation entitlements.

“The Board of Directors of the Corporation, after in-depth review of the situation, concluded that the payment of the end-of-service benefits to these management personnel, who had made invaluable contributions to the development of the Corporation, is a valid obligation. The Board took the position that meeting this obligation, however belatedly, is the right thing to do,” the statement quoted the Board as saying.

However the GNPC statement did not disclose the exact amount paid to the four employees.

In a twist to the GNPC tale, Ms Cobbah has denied ever receiving the cash said to have been approved and paid by the Board of the Corporation.

Chronicling her long years of service at GNPC and the circumstances under which she was dismissed, Ms Cobbah said in her statement that she is owed huge sums of money in entitlements.

“I worked in various capacities for GNPC from 1989 when I set up the Public Affairs Department of the Corporation, including being Public Affairs Manager. In 1999 I was sent on secondment to the West African Gas Pipeline project as the External Affairs Manager. I set up the External Affairs Department of the project with staff from the four countries- Nigeria, Benin, Togo, Ghana. I was in that role when, in May 2001, I went with the Project Manager, an employee of Chevron, to a meeting at the office of the then Minister of Energy of Ghana. Quite unexpectedly, the Minister announced that the Government was removing me from the project,” the statement said.