President John Dramani Mahama has stated that as Chairman of ECOWAS, he never called for a new voters register for the elections in Togo.

He challenged the New Patriotic Party (NPP ) and the Let My Vote Count Alliance ( LMVCA), which had consistently claimed that he called for a new Togolese electoral register to prove their allegation.

He explained that what he called for was an audit of the electoral register, which the Electoral Commission, the governing party and the opposition agreed to.

Addressing a rally of the National Democratic Congress (NDC ) at the Jackson Park in Koforidua last Saturday as part of his one-day visit to the Eastern Region, President

Mahama said, “So what the NPP are saying about me on the Togo elections are lies.”

The NDC, in the quest to win next year’s elections, has vowed to get at least 50 per cent of the popular votes in the Eastern Region.

And the enthusiasm with which party members massed up at the rally grounds, perhaps signalled their determination to work towards the task.

In the 2012 elections, the NPP won 43 per cent of the votes in the region. Eastern and Ashanti were the only regions where the NDC lost to the NPP.

During a visit to Lome prior to that country’s Presidential elections, President Mahama, who was Chairman of the ECOWAS Authority of Heads of State and Government, asked for postponement of the elctions to allow Togo’s Commission Electorale Nationale Independente (CENI) complete work on finalising the voters register and its validation processes.

He explained that “in view of the work that has to be done, in validating the voters register, it makes it very difficult for the election to come off on the 15th of April. ECOWAS proposes that the election be shifted by 10 days to April 25 so that enough space is given for issues relating to the voters register to be resolved to everybody’s satisfaction in advance of the election.”

Speaking to journalists after a day’s working visit to Lome in his capacity as Chair of ECOWAS, President Mahama said the issue of the voters list was the most important for the various political parties.

He noted that officials from La Francophonie were helping the CENI in the clean-up of the voters register for the elections, and this should be completed in about one week.

Looking at the sea of party supporters at the,rally, President Mahama, who attended the event with his wife, Mrs Lordina Mahama, showed the victory sign and said, “God is with us; we are winning one touch.”

He said the Agenda 50-50 was a reality for which reason he would give his full support to it.

He also said the NDC needed every single vote that would see them through and, therefore, urged the party members and supporters in the region to work assiduously towards that.

He mentioned the numerous development projects the government had undertaken in not only the Eastern Region but other parts of the country and added that “the evidence of our work is there for all to see.”

“We have the track record in all sectors,” the President said. He described the NDC as the best organised party in the country today.

Ghana, he said, was a country in a hurry and had no time for others to solve their differences before seeking the mandate of the people to govern.
“NDC is in power and is ready to continue in power,” he stressed.

He pointed out the importance of the upcoming NDC primaries and called on the party members to give him 100 per cent endorsement for the NPP to appreciate that the entire NDC was behind him to lead the party towards,another decisive victory, come 2016.

He also stressed the need for the party to maintain its majority membership in Parliament and, therefore, urged the party members to elect parliamentary candidates who could win in 2016.President Mahama dismissed Nana Akufo-Addo’s position that he (President) was copying his planned programmes such as the free education policy.
He indicated that what Nana Akufo-Addo promised was free education, which was different from what the NDC was implementing today and questioned his justification for describing the progressively free education policy as something that was copied from NPP.

On the power crisis. President Mahama stated, “By the Grace of God, I will fix it.”

The General Secretary of the NDC, Mr Johnson Asiedu-Nketiah, described the impressive attendance at the rally as a dress rehearsal for what would happen in the next general election.

He lashed out at the NPP for suggesting that voting with the current voters register could result in violence and added that it was indicative of a party that was pregnant with violence.

He asked the NPP and LMVCA to allow the Electoral Commission to take a decision on the issue rather than resorting to threats. 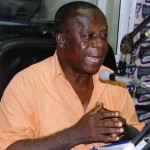