Former Attorney General and avowed critique of the John Mahama administration Martin Alamisi Amidu has confessed that his anti- corruption campaign against John Dramani Mahama and his appointees were based on mere public perception.

MY ALLEGATIONS AGAINST MAHAMA WERE BASED ON PERCEPTION – MARTIN AMIDU TELLS APPOINTMENT COMMITTEE.

Perception is strictly ones take on something from the point from which he or she view it. The reality of what you view remains unchanged as it is reality unobstructed. You only see it differently because of your point of view. That does not mean that your view is correct. It just mean it’s your point of view. To get a true sense of reality you must be close to what you are viewing or your perception will be flawed. Mr Martin Amidu attested to this assertion when he was asked why people hold negative view of him. He said “Perception is the problem” and narrated a story about how he assisted a lawyer who worked at the AG’s office in the 90s to undergo surgery outside Ghana.

Before the 2016 election, Mr Martin Amidu levelled so many allegations against former President Mahama, the NDC and the Chairperson of the electoral commission including planned vote rigging, corruption etc. When he was asked to substantiate his allegations, he told the committee that he made those allegations based on perception. He said his allegations were based on information he gathered from his informants some who are dead. When he was asked to provide evidence to substantiate his claim that President Mahama collaborated with Anas Amereyaw Anas to suppress Anas’s information on members of Parliament, he said, what he said about the President Mahama and Anas was his view. Mr Amidu described Anas’s organization and operation as illegal and threatened to sue them for engaging in illegal operations. But he told the committee that his outfit (Special Prosecutor Office) will collaborate with Anas in its investigations. 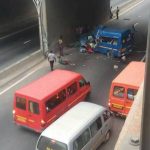