Former minister of trade has maintained that his intention to either stand for the 2018 NDC primaries or not is yet to be made known.

Reacting to earlier claims by a member of his Fan Club – Kwaku Tawiah – that he, Spio Garbrah, is interested in standing as flag bearer of the party,the former minister stated that he has not yet made a decision.

“What has been said so far came from members of my fan club who are hoping that I consider becoming a candidate but that is different from me myself saying I am a candidate. If I am declaring my candidacy for anything, I will not do so through alliances. I will speak for myself,” he revealed in an interview with CitiFM.

So far, it remains unclear if indeed former president Mahama will be contesting for the flag-bearer race as 5 other names including that of the former Accra mayor, Alfred Okoe Vanderpuije surfaces. 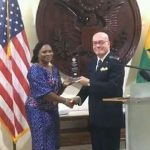